Colonialism and the epistemology of ignorance: a lesson from Afghanistan

As with the colonial project, the important thing was to prevent Afghans from characterizing their country on their own terms and claiming a future in accordance with their own aspirations. 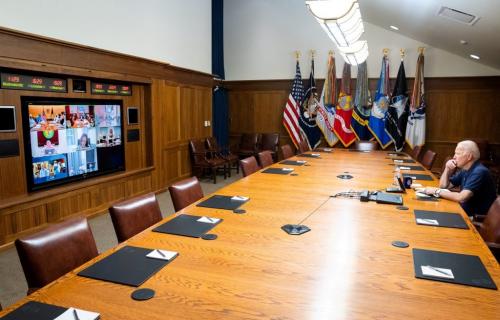 The abrupt and chaotic U.S. withdrawal from Afghanistan in mid-August filled the news around the world. With more or less variations, these were the main topics: humiliation for the U.S. and its European allies; a repeat of the 1975 withdrawal from Vietnam; mission accomplished according to the U.S., mission failed — in the words of Angela Merkel herself — according to the allies; the desperate flight of Afghans who collaborated with the Allies; imminent danger with regard to women’s rights, if sharia is imposed — as is to be expected, given the Taliban’s interpretation of Islam; more than two trillion dollars spent on a twenty-year mission against terrorists, only to see them triumphantly and effortlessly entering the presidential palace, now no longer as terrorists but as a political force with which the U.S. — the principal military force in Afghanistan — signed an agreement in February 2020, after over a year of negotiations held in Doha. According to this agreement, the U.S. committed itself to withdrawing its military forces within 14 months, a fact that went unnoticed by many, as it coincided with the outbreak of the COVID-19 pandemic. This is extremely dramatic, but it is also beyond comprehension. The superficial froth of the news is meant for viewing, not for comprehending, and so it tells us little about the deep turbulence that generates it. In this case, comprehension requires that we go back historically and engage in an epistemological critique. In other words, we must go back in time and reassess history in the light of an epistemology that allows us to know that side of history that remained hidden but has finally become preciously necessary for an understanding of what happened in Afghanistan. I will attempt to show that there are intriguing continuities with everything that happened before and with the way in which it has been narrated throughout the Eurocentric world since the sixteenth century, in the wake of colonial expansion.

Since the beginning, the legitimization of Europe’s maritime expansion rested on the desire and the mission to propagate the Christian faith. The presence of the Catholic Church was both constant and decisive. Under its aegis, the world waiting to be found was divided between Portugal and Spain. The Church also legitimized the submission of “the Indians” when it proclaimed (in the year 1537, through Pope Paul III’s bull Sublimis Deus) that they were human beings with souls and, therefore, endowed with not only the need but also the capacity to be evangelized. We do not mean to question the good faith of the many thousands of missionaries who participated in the mission to save the Indians in the next world, but we know well that the primary objective of this mission was far more practical and mundane, namely the salvation of Europeans in this world, by way of the economic prosperity that was made possible by the access to the natural riches of the New World. It is very doubtful, to say the least, that this evangelizing mission was in any way beneficial to the Indians, but there is no doubt that the mission of plundering the riches led to the level of development now flaunted by the Eurocentric world of the North Atlantic.

In similar fashion, the U.S. invaded Afghanistan, according to U.S. authorities, to neutralize the terrorism that resulted in the 2001 barbarous attack on the Twin Towers. With the killing of Osama bin Laden, this mission is supposed to have been accomplished. But that is far from the truth. The terrorists who attacked the Twin Towers came from four different countries: 15 were Saudi citizens, two were from the United Arab Emirates, one was from Lebanon and one from Egypt. None of them was from Afghanistan. Although himself a Saudi, Bin Laden, the head of al-Qaida, remained in hiding for years, not in his own country, but in Pakistan, and very near to Pakistan’s leading military academy at that. The U.S. interest in intervening in Afghanistan dated from the 1990s. The justification used was the need to build and protect the Turkmenistan-Afghanistan-Pakistan-India gas pipeline (TAPI), aimed at addressing South Asia’s energy shortages. The motive was the same as ever: to ensure access to natural resources and, more recently, to prevent control by China and Russia. Thus, at the same time that a wave of macabre violence washed over the country (killing around 200,000 Afghans, both military and civilian), that millions of dollars were spent, most of them lost to corruption, and the Taliban were supposedly being eliminated, negotiations were being held (secretly at first, then officially) with some Taliban groups. It is therefore ludicrous to talk of mission accomplished in connection with the fight against terrorism. One mission has, indeed, been partly accomplished, that of gaining access to natural resources. But even this mission was achieved under the facilitation of India and Pakistan and without compromising China and Russia’s access to gas. On the other hand, it is China that has emerged triumphant from the Afghan crisis. It has done so against U.S. interests, to the extent that it ensures that its major investment in Central Asia, the New Silk Road, will continue. Since 1945, the U.S. has suffered one military defeat after another while spreading death in the most horrific manner and proving totally incapable of stabilizing friendly governments. Take the humiliating 1975 withdrawal from Vietnam, the disastrous intervention in Somalia in 1993­–94, the no less humiliating 2011 withdrawal from Iraq, or the 2011 destruction of Libya. All that notwithstanding, the U.S. has almost invariably managed to guarantee access to natural resources, which is the only mission it truly seeks to accomplish.

Ignorance as a strategy for domination

When colonial expansion first began, it was a leap into the unknown. Once that leap was taken, expansion was basically about finding out which aspects of the peoples and countries to be invaded might facilitate invasion. As far as the colonizers’ cognitive investment was concerned, the prospect of penetration, plunder, and elimination/assimilation overrode all other considerations. Anything that went against such expectations was to be written off as being non-existent (civilization/culture), irrelevant (“primitive” technology), backward or dangerous (cannibalism, superstitions). Hence, the creation of an immense sociology of absences. In time, the accustomed demands (the prospect already alluded to) called for a cognitive investment that, although more sophisticated, was driven by the same desire to dominate. Hence the rise of colonial anthropology, tropical medicine, colonial history, colonial law, etc.

Western ignorance with regard to Afghanistan is staggering. In a 2015 article entitled ‘America’s shocking ignorance of Afghanistan’, published by the Wilson Center, Benjamin Hopkins showed that, to this day, Western policies on Afghanistan are based on the ideas contained in a book first published in 1815 by Mountstuart Elphinstone, Britain’s first ambassador to the kingdom of Afghanistan. Elphinstone based his ideas about the Afghan tribal society on his readings of Tacitus’ narratives of the Germanic tribes and on his own recollections of the clans of his native Scotland. According to Hopkins, the ethnolinguistic map of Afghanistan now in use by the U.S. military is basically an updated version of the one included in Elphinstone’s 1815 book. This has led to the assumption that the problem of Afghanistan was ethnocultural rather than political, and that tribal culture was the ultimate cause of extremism and corruption. The problem, of course, does not reside in valuing the importance of culture, but rather in viewing it as ahistorical and in terms of stereotypes. The persistent ignorance of Afghan realities has proved essential in the conceiving of Afghans as passive recipients of Western policies, be they those of the Soviet bloc or NATO. The “experts” on Afghanistan were experts on… terrorism. Tribalist reductionism has made it impossible to see that Afghan society is now also a society of refugees, as well as a globalized society. On the other hand, it has made it easy to provide justifications for all types of intervention and for the tragic failures that resulted from them.

Today we know that the complexity of the societies that the colonizers found was different from the complexity they attributed to their own places of origin and that, as a result, the former were described as simple societies, lacking in political structures and institutions. The privilege of defining and naming the other is probably the ultimate and most candid expression of colonial power. Amid the smoke and mirrors created by this privilege, the colonized peoples came to be described as wild, primitive, backward, lazy, filthy, underdeveloped. The underlying assumption of these characterizations is that they convey everything that is worth knowing about those thus described. In this way, they at once promote and conceal the de-specifying of their objects.

Thanks to this politics of naming, colonial policies over the centuries would prove easy to justify. After the latest invasion of Afghanistan, the invaders divided the Afghan people into two categories: terrorists and victims. Afghans were then documented, surveilled or bombed based on this division. At no time (except when it was necessary to protect access to natural resources) were they given the opportunity to be regarded as valid interlocutors or as populations and generations endowed with diverse aspirations and needs. Based on such premises, the only kind of knowledge that was sought was knowledge about the Afghans, never knowledge with the Afghans. The active production of ignorance was crucial in terms of justifying the definitions, representations and theorizations underlying the intervention policies. Afghanistan came to be viewed as an immense terrorism depot. Furthermore, the sole purpose of the war on terrorism is to identify and eliminate terrorists. Everything else is “collateral damage”. As with the colonial project, the important thing was to prevent Afghans from characterizing their country on their own terms and claiming a future in accordance with their own aspirations.

Technological knowledge hinges on understanding and transforming reality based on systematically observed phenomena, combined with a contempt for and ignorance about unobserved ones. Since the eighteenth century, what we term social progress is a product of technological knowledge. Wisdom does not necessarily stand in opposition to technological knowledge. But it does subordinate it to the understanding and promoting of the value of individual and collective life, and for that to happen it is necessary to take into account both observed and unobserved phenomena. In practice, Western knowledge — notably when at the service of colonial expansion — became technological knowledge and was always firmly opposed to the idea of wisdom. The consequences of this fact can be clearly seen in the epistemicides (the destruction of the knowledge of the colonized), linguicides and genocides committed over the centuries.

In Afghanistan, the fixation on technology has reached new heights, leaving behind more than 200,000 dead and a plethora of experts on new destruction technologies. Among the most macabre new areas is that of drones. In a piece entitled “Damage Control: the unbearable whiteness of drone work”, published in the March 16, 2021 issue of Jadaliyya, Anila Daulatzai and Sahar Ghumkhor show how Afghans — and the Somalis, Yemenis, Iraqis and Syrians — are lumped together under that new field of interdisciplinary scholarly expertise that goes by the name of “drone culture”. According to the authors, the novel discipline “explores drone cultures from multiple perspectives and practices with the aim of generating dialogues between disciplines to understand the diversity of drones and drone culture”. In the context of Afghanistan — which has played a major role in the growth of the new field — what we have is a technology of death elevated to the dignity of an epistemology, a scientific edifice built on nothing but death and ruin. One can hardly think of any other issue, in recent times, in which technological know-how and wisdom are so entirely ignorant of each other.