The inclusion of digital rights in Chile’s new Constitution

There are times when windows of opportunity open up to advance the rights of peoples and at the same time allow for the adaptation of norms to new situations. In Chile, this possibility is emerging with the drafting of a new Magna Carta. 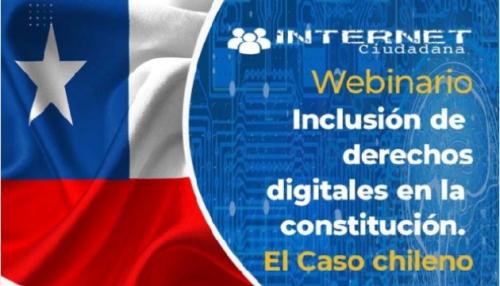 There are times when windows of opportunity open up to advance the rights of peoples and at the same time allow for the adaptation of norms to new situations. In Chile, this possibility is emerging with the drafting of a new Magna Carta, which for the first time in Latin America and the Caribbean would include Digital Rights.

What Digital Rights are being considered? How will people be protected from the invasive advance of corporate platforms over their data and their dignity? Will Internet access be a guaranteed right? Will citizen participation be guaranteed without discrimination against those who choose not to be connected? Will the Constitution favour decentralisation and plurality of communication in the digital sphere, or will freedom of expression be subordinated to economic power, as it has been until now? How are these rights being considered from a gender perspective? How can popular demands for environmental protection, plurinationality or territorialisation be incorporated into the digital sphere? What will be the nature of data ownership?

These questions, among others, were addressed in the webinar “Inclusion of Digital Rights in the Constitution. The Chilean case” Patricia Peña Miranda, academic of the Institute of Communication and Image of the University of Chile and Juan Carlos Lara, Executive Director of the organisation Derechos Digitales in dialogue with Sally Burch (ALAI), co-facilitator of the Citizen Internet space.

In the presentation, Burch alluded to the process of analysis that the organisation has been carrying out, which has managed to bring together a wide range of social collectives, communicators, digital activists and researchers to deepen and raise awareness about the impacts of the digital era in the region and to formulate proposals from a perspective of democratisation and social justice.

In order to broaden the context of the issue, Lara highlighted the importance of the framework of social discontent from which the process of drafting a new constitution, which is a necessary regulation to lay new foundations for a future country, is gaining momentum.

In relation to the digital era, modes of social interaction can be more or less favourable for people whose human rights can be affected or conditioned by economic or regulatory situations, the root of which lies precisely in the Constitution.

On the other hand, these legal frameworks often lag behind the dizzying advance of technologies. “It is not enough to recognise rights, but it is also necessary to provide a framework of conditions in which these rights can become effective,” said the lawyer and master’s degree holder.

Patricia Peña, for her part, set out as an important precedent the debate that had been taking place in Chile on how to democratise communication, the need to consider radioelectric space as a public good, and how the lack of public infrastructure affects, for example, the possibilities of equitable connectivity.

In relation to the main proposals on digital rights that are approaching the Constitutional Convention, she indicated that since the date of the social outbreak, collective discussions have been taking place and demands have been formulated in this regard, but it is important to remember the great expectation that the new Constitution will reflect environmental, plurinational, gender and popular participation paradigms across the board.

Among the postulates that are crystallising is the enshrinement of the basic right to connectivity as a duty of the state and the necessary guarantee of freedom of expression and the care to be taken to protect it. Another important issue is that of free technologies and the power to move away from centralised modes of communication. Similarly, the configuration of personal data protection guarantees is being considered, which in Chile is currently quite lax and controversial. This is very detrimental to women because of their exposure, which reinforces the need for a clear gender perspective in this area.

Peña indicated that progress should be made towards an institutional framework that would allow for a sort of “Agency for the protection of personal data”, with autonomy from the rest of the powers, as well as effective oversight bodies.

The recognition of inequalities (of rural populations, gender, indigenous peoples, geography, among others) is significant in the digital sphere, Lara pointed out, as is the need to promote social participation in order to overcome democratic deficits. Similarly, creating incentives for the generation of content in languages other than the predominant one can not only guarantee the right to freedom of expression but also strengthen the achievement of cultural rights.

The state, she added, must allow, encourage and guarantee alternative, self-managed forms of internet connection, such as community networks, which means that, at the constitutional level, it cannot adhere to an economic model that is functional to private companies or exclusively state provision of the service.

When asked by the audience about the gender perspective with which the constitutional text should be approached in relation to digital issues, Patricia Peña said that a first point promoted by feminist organisations has to do with overcoming the digital divide that affects women, particularly and to a greater extent rural women, migrant women, indigenous women and older women. Another important aspect is the participation of women not only as users but also in the creation and possibility of training and employment in the field of these technologies. A central issue is to be able to guarantee that girls, adolescents, women and sexual dissidents can live a life free of digital violence, free of surveillance and any other factor that could put their existence at risk.

In response to Sally Burch’s question on the issue of data ownership and the possibility of considering collective power over data, an issue that goes to the heart of the economic model, the director of Derechos Digitales stated that it is very important to think about the way in which data can be used by the public administration in a legitimate way for purposes of public interest, establishing safeguards, security conditions and rules of access and transfer that prevent the private appropriation of this use. Both data and digital technologies can be useful for a more democratic future, they can constitute an opportunity for social purposes and not only be considered as a risk due to the fact that today certain companies take advantage of it for private purposes, he concluded.

On possible guarantees of the right to non-connectivity as an individual or collective option, the academic stated that in many places there are effectively no consultation mechanisms or consent systems regarding the deployment of technological solutions, and related this possibility to the types of connectivity services that are made available, while warning of the certain risk that a new exclusionary bias could be generated by not being connected.

Regarding the receptiveness of these proposals in the Constitutional Commission in charge, but also in other commissions that deal with rights in general, both Lara and Peña agreed that this is a broad process that has just begun and will be deepened in the coming months with the active participation of social organisations and initiatives.

In relation to the future of this process, which will lead to a plebiscite for the approval or rejection of the text agreed in the Convention, the importance of the second round of elections to be held shortly cannot go unmentioned, as the scenario appears complex with a candidacy that could jeopardise all that has been achieved.

The Webinar can be viewed in Spanish here: https://youtu.be/3FVUEz-A7FA