«It»: Neo-McCarthyism in sight

Republican politicians from Miami have proposed creating an ideological police, in the best KGB style, to detect and persecute those suspected of being “communists.” A “new State Department position [to] combat communism and authoritarianism". 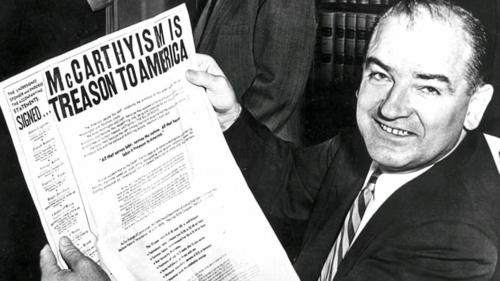 Years ago, in 2015, the Florida Senate approved the right to carry weapons in the state’s public universities. Despite the fact that almost half of the students are under medication and not a few suffer from psychological imbalances, stressed by culture and the natural crisis of age, the Wise Elders of the senate considered that, if each one is armed, they will all feel safer. For those of “the land of the free and the home of the brave”, who do not dare to travel abroad because they cannot sleep without a weapon under their pillow. Perhaps for this very reason, in each generation, hundreds of thousands are sent with military equipment and high technology to those “shithole countries.”

In 2021, the same Senate approved the bill that requires students and professors to report any bias of their professors. Contradicting a previous law that prohibits someone from recording another person without their consent, the new law allows (encourages) the recording of professors’ classes so that they can be denounced (not in public but before the authorities) for some “ideological bias”. Of course, the ideology of others, not that of us in power. It is no longer enough that the boards that govern the universities are not elected by students and professors as in other more democratic countries; it is not enough that (as “the communist president” Eisenhower denounced) large corporations direct much of the research with “generous donations” deans and presidents beg every day to build nice buildings and pay “salary raises” that do not even cover the inflation.

Want more? This year, 2022, Republican politicians from Miami (among them, a former Cuban mayor and a Cuban representative from New York) have proposed creating an ideological police, in the best KGB style, to detect and persecute those suspected of being “communists.” A “new State Department position [to] combat communism and authoritarianism… [A] Special Envoy to Combat the Global Rise of Authoritarian Socialism and Communism would be modeled on a similar State Department ambassador-level position which was created in 2004 to combat global anti-Semitism.”

They failed to add that the project is inspired by McCarthyism and the FBI’s ideological persecution since the 1950s: persecuting people like Chaplin, Malcolm X, Martin Luther King, Frank Teruggi, Noam Chomsky, John Lennon, and many others.

The former mayor of Miami clarified to the press: “It is time for the United States to reaffirm its commitment to combat communism and authoritarianism throughout the world. As the leader of the Free World, we must continue to uphold the universal values of freedom, democracy, and peace.” Seriously, it’s not a joke.

Even more? Recently, a new proposed law would prohibit in schools the mention of people with rare sexual orientation, such as gays and lesbians. The bill is known as “Don’t Say Gay” and would ban any mention of “them,” making Walt Whitman, Oscar Wilde, and Tennessee Williams suspect in any literature course. Alan Turing will be banned from any computer science course. Little books where people kill en masse, yes. Princesses who wake up at the kiss of an unknown savior prince, yes. Beating our chests because we are a culture that defends diversity and freedom, yes. Recognize that there are different people and can have the same rights as us “normal people”, no. The only difference between these people and the Taliban in Afghanistan is that there is still resistance on this side: us and the dangerous lesbiano communists.

Now, what’s new? On April 19, 1950, the New York Times reported on Senator Joseph McCarthy’s dogma: “In recent years, sexual perversion has infiltrated our government and is as dangerous as communism.” McCarthy had convinced the famous director of the FBI, Edgar Hoover, to persecute all homosexuals and lesbians, considered “a threat to national security”. On April 29, 1953, President Eisenhower signed an executive order prohibiting all homosexuals from working for the government.

Hoover hired a McCarthy henchman, Roy Cohn, to fire all homosexuals from the government and from any other type of work or, directly, send them to jail for their crimes against The moral. Cohn was a homosexual, an acquaintance of Hoover, an assistant to McCarthy, and later a lawyer for real estate developer Donald Trump, when he was accused of racism in 1971 and later in 1978 for preventing blacks from renting in his buildings. Roger Stone, a strategist for Trump’s 2015 presidential campaign, met Cohn while working for the Ronald Reagan campaign. According to Stone, “Roy was not gay. He was a man who liked having sex with men. Gays were weak, effeminate. He always seemed to have these young blond boys around. It just wasn’t discussed. He was interested in power and access.”

Hoover, the director of the FBI for decades, was also gay. His partner, Clyde Tolson, secretly accompanied him until his death. But under that power, thousands lost their jobs for not being heterosexual enough, since, according to them, gays and lesbians, like blacks, professed the communist ideology of equality.

Even today, citizenship tests in the United States continue to include the question “Have you ever been a member of the Communist Party?” Not a word about the Nazi party, the Ku Klux Klan, or similar fascists. So is the new Miami bill.

Now, how to avoid looking at reality? Recently, several professors lost their jobs for citing historical documents that included “the N-word”, even though they were doing so to denounce racial violence throughout history. Serious researchers have even avoided (just in case) transcribing that entire word in their books and opted for “N***”. It doesn’t matter if until recently Martin Luther King, James Baldwin, and Malcolm X used it in every speech.

Want more? In several states, legislation has been passed to prohibit the revision of the official history, prohibiting the study of what is known as “Critical Race Theory”. This includes The Wild Frontier. 200 Years of Anglo-Saxon Fanaticism in Latin America. Conservatives love to call any theory they don’t like, like the Theory of Evolution, a “theory.” The Theory of Creation in Seven Days would not be a theory, but a fact.

Want more? In Tennessee, Spiegelman’s comic book Maus has just been banned because it includes some profanity and a drawing of a nude woman (a very little drawing of the author’s mother dying). The book is a classic of its kind about the memoirs of the author’s father, an Auschwitz survivor. The same Puritanism that in 1921 censored the original English version of Joyce’s Ulysses. To add to this stream of absurdity and strategic infantilization of societies, UK is also banning in its schools George Orwell’s 1984 novel, for containing unpleasant expressions that could hurt some young sensibilities.

The strategy is clear: if you don’t talk about it, It doesn’t exist. As a consequence, It is perpetuated, as in times of slavery, by the very will of the victims. As always, all this garbage will reach Latin America in one way or another. After all, they are still colonies proud of their freedom.