The political pressure from Peru’s right-wing sectors, through smear campaigns in mainstream media, forced President Pedro Castillo to reshuffle his cabinet for the second time in a week. 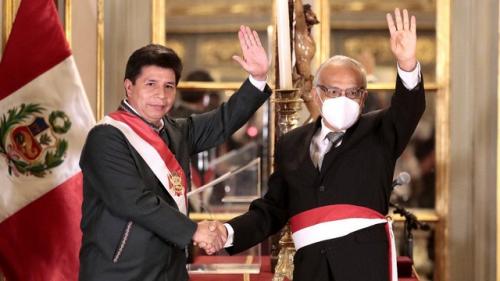 On February 8, Peruvian President Pedro Castillo swore in his fourth ministerial cabinet in his little more than six months in office with lawyer Aníbal Torres as the new prime minister and head of the council of ministers. Torres had been serving as minister of justice and human rights since Castillo’s government assumed power on July 28, 2021. He was replaced by judge Angel Yldefonso.

In addition to the Prime Minister and Justice Minister, the Ministers of Agriculture, Energy and Mines, Women, Environment, and Health were also replaced. Meanwhile, the Ministers of External Affairs, Defense, Economy and Finance, Interior, Culture, Education, Labor, Produce, Foreign Trade and Tourism, Transport, Housing, and Development and Social Inclusion were ratified. Three out of the six newly replaced ministers (agriculture, energy and mines, and health) belong to the left-wing Free Peru party, which bolstered Castillo to power but was largely excluded in the previous two cabinets, while the other three ministers (justice, women, and environment) are experts in their field.

The recent reshuffle, the second in a week, was the result of the political pressure from Peru’s right-wing forces, which dominate the Congress, against the previous prime minister Hector Valer. Valer was forced to resign just four days after taking office, due to a smear campaign in mainstream media backed by far-right legislators, who accused him of domestic violence in 2016.

Valer condemned the accusations against him as unfounded and politically motivated, and called on President Castillo’s supporters to remain united in the face of attempts to promote political chaos. “I accepted the post to promote the much-needed political, legal, and economic stability in our country. I have failed in this task, but I withdraw with the assurance that other politicians will continue to fight social injustice in Peru.” stated Valer. He stressed that “the right-wing lawmakers must understand that there is no guerrilla war in politics. Law rules, and they must recognize the electoral victory of those who govern, just as we recognize that the right-wing parties govern in Congress.” Valer assured that Castillo wants to promote a welfare state in favor of the Peruvian people, for which he is willing to make concessions. “The president knows he must build bridges and remove obstacles: this is his main objective at this time,” he pointed out.

On February 7, Castillo denounced coup attempts against his government by some political sectors, through intense smear campaigns in the media. In a statement shared on his social media accounts, the head of state condemned that “in this new media campaign that aims to promote the presidential vacancy, anti-democratic attitudes of some sectors that only seek to destabilize the country and put governability at risk are exposed.”

At the same time, he rejected the unfounded theories of his former officials that his trusted team interferes in decision-making, stressing that “those statements in all their extremes are false, since the beginning of my administration, I have been respectful of the decisions of the state ministers.”

Likewise, he reiterated his government’s “commitment to providing solutions to Peru’s biggest problems,” and ratified his determination to govern until the end of his mandate. “I was elected by the people, by the citizens’ majority. My commitment remains valid and stronger until July 28, 2026,” he assured.

Similarly, he announced that his new cabinet would be “more participatory and broad-based cabinet for greater benefit of Peruvians.” He also called on the cabinet members “to continue working in favor of the most vulnerable population and for our beloved homeland.”