Central America between the sword and the dragon

In Central America there is a need for investment in infrastructure for the extension, adaptation and diversification of energy sources in the region. 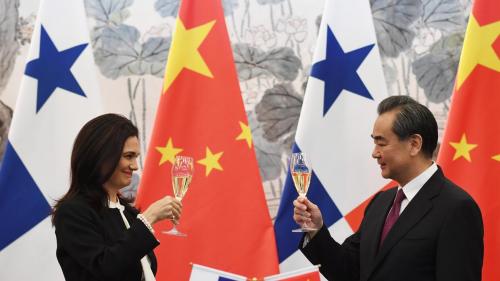 This paper seeks to provide an overview of Central America's geo-economic reconfiguration, emphasising energy issues. As of 2019, El Salvador and Nicaragua seem to be leaning towards China. There is a need for investment in infrastructure for the extension, adaptation and diversification of energy sources in the region.

Central America is an area with enormous potential for renewable energy production; most countries in the region produce at least 60% of their electricity from clean sources. The Electrical Interconnection System of Central American Countries (SIEPAC), which connects with Mexico and plans to reach Colombia, has reduced electricity production costs, improved grid efficiency and included clean energy. It has made it possible to address energy poverty, defined as the inability to access essential electricity resources for work, domestic and other activities. This energy corridor, which still requires an investment of USD 118 billion, is shaping up to be the most important in the continent.

But the constant that we find in Central American countries (and in the continent in general) is that almost all of the decarbonised energy produced comes from hydroelectric sources. The exception is Nicaragua, whose production comes mainly from geothermal sources. The problem with this energy supply is that it can be affected by droughts or natural disasters, not to mention that dams generate sediments that account for 23% of methane gas emissions into the atmosphere.

Most of the energy for mass transport of passengers, freight and cars are still produced with fossil fuels, which all countries in the region must import. It keeps them exposed to the volatility of oil prices, which have risen dramatically since April 2020. An example of this is Costa Rica, whose transport accounts for 64.5% of its total energy consumption, costing approximately 200 million per year. Therefore, it is seeking to develop the green hydrogen market, which will enable it to meet its domestic demand.

In December 2021, the Central American Bank for Economic Integration and the EU established a joint fund of USD 5.5 million for climate adaptation and green hydrogen development. In the same month, the launch of the EU's Global Gateway strategy, like the US's B3W, was discussed to counter China's influence in Central America. The EU seeks to invest up to USD 342 billion between 2021 and 2027 in Latin America and the Caribbean, emphasising the development of renewable energy projects, sustainable transport and digital development.

In May 2021, El Salvador and China ratified a USD 500 million economic and technical assistance agreement signed in 2019. Nicaragua announced the termination of diplomatic relations with Taipei in December 2021 and expected a similar deal.

Honduras would most likely be on this list without Washington's pressure on Xiomara Castro. The US and Honduras agreed in 1981 to have the Enrique Soto Cano US military base in Honduras as a training centre for Latin American armies. In addition, it allows the rapid deployment of troops to any point in LA and houses between 500 and 1,500 military personnel. It was the centre from which the US waged war against Nicaragua in that decade, led by Oliver North.

Central America's need to produce intelligent, cost-effective, diverse and independent energy aligns with China's vision of infrastructure investment. Sixty per cent of China's investment projects in LAC are related to power, and the region is the second most important destination for Chinese investment after Africa. These investments amount to USD 63 billion until mid-2021.

Central America has been moving closer to the Asian economy since 2019. Central American exports to China increased 142.2% in 2021 (Central America Trade Monitor second quarter 2021), and it was also the second most importing country after the US (the gap is still abysmal with the US leading the market that concentrates most of the exports). The EU, on the other hand, is an essential ally for Central America, having signed a free trade agreement in 2013, as it did with the US in 2004, its leading trading partner.

China has taken the lead in the South American renewable energy and infrastructure investment sector, while North America remains heavily influenced by the United States. On the other hand, Central America finds itself in a geopolitical triangle between China, the US, and the EU and needs to define its allies in the energy transition. El Salvador and Nicaragua, traditionally conditioned by the US, are leaning towards China, something that in the short term it does not appear that Honduras will or can do.