Large farms cultivate a high and increasing share of land in the world. 40% of the world’s farmland is operated by farms over 1000 hectares, while the top 1%, all more than 50 ha, have 70%. 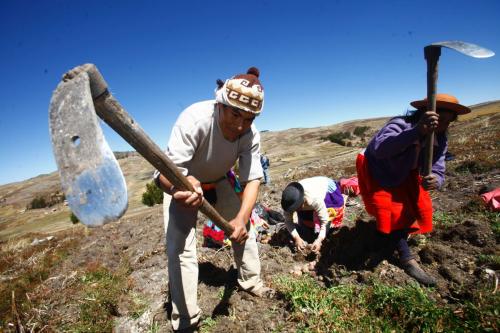 A recent Food and Agriculture Organization (FAO) study shows the largest farms cultivate a high and increasing share of agricultural land in much of the world.

World Agricultural Census data for 129 countries show about 40% of the world’s farmland is operated by farms over 1000 hectares (ha) in size. About 70% is operated by the top 1% of farms, all bigger than 50 ha each.

A rising share of farmland is in larger farms. But farm sizes in developed and developing countries seem quite different. Farms smaller than 5 ha accounted for 63% of land in low and lower middle-income countries. But such farms covered only 8% of farmland in upper middle and high-income countries.

The “share of farmland farmed on the largest holdings has increased in … several European countries (France, Germany and the United Kingdom of Great Britain and Northern Ireland) and in the United States of America.” Similarly, in recent decades, more land in many Latin American and sub-Saharan African countries is in larger farms.

Agricultural censuses typically rely on land records, usually neither up to date nor complete. Large farms often have land registered to different persons and entities, typically to avoid taxes and bypass land ownership ceilings and regulations.

Government surveys in India have not comprehensively covered large farms, understating inequality. Other data from India suggest the top fifth of farms account for 83% of land.

Even where large farms are legally recognized as commercial entities, land is often held via subsidiaries in complex arrangements. For such reasons, the extent of concentration is probably greater than what the study suggests.

Despite its limitations, the study findings are ominous. Changing inequalities in farmland ownership and cultivation have reduced the smallholder or peasant share of food production.

The study suggests that ‘land grabs’, new laws and policies have enabled large (capitalist) farmers, agribusiness corporations and other commercial entities to control most of the world’s farmland.

Disparities in government support allowed by World Trade Organization and other trade agreements have enabled large farms in developed countries, like the US, to gain more advantages over relatively uninfluential peasants in the South.

More advantages to big farm capital in recent decades, particularly to large-scale commercial agriculture in the global North, have enhanced their edge. More peasant distress has pushed many deeper into debt. Many of the most vulnerable have had to migrate, seeking precarious employment elsewhere.

Under various pressures not to protect food agriculture, developing countries have cut support for peasants. Withdrawal of such assistance has forced farmers to buy inputs at commercial prices. Meanwhile, many have to sell their produce cheap to those providing credit or other facilities.

By enabling easier land takeovers, commercial farming has quickly spread in ecologically fragile areas such as the Brazilian Cerrado, various parts of sub-Saharan Africa and steep slopes subject to deforestation.

The study has triggered a controversy by asserting that ‘family farms’ is a broader category than smallholdings. These would include large family-owned or run farms.

Hence, family farms account for 80% of the total value of food produced in the world, while smallholdings account for only 35%. These estimates have been contested by several civil society organizations who have protested to the FAO Director General.

Most agricultural censuses do not provide data on production by farm size. Instead, the study divides the total market value of a country’s food output by its total farmland. It then assumes a constant food output value per hectare. But this ignores significant differences in crop output among farms of different types.

In many countries, large farms produce more commercial crops, not necessarily food. These may be for manufacturing (e.g., rubber, cotton), animal feed, or to be industrially processed for consumption (e.g., sugar, palm oil, coffee).

Many smallholder peasants consume significant shares of their own farm outputs. They typically work on limited land and need to meet their own food needs, rather than maximize cash incomes. Hence, their priorities may be rather different from those of commercial farms.

Although not universal, and often overstated, there is evidence of smallholders having higher land productivity, inversely related to farm size, owing to differences in the way factor inputs are used by various types of farms.

By assuming constant food output value per hectare, the study ignores many important variations, and probably under-estimates the contributions of small farms to world food supply.

The study shows how various systemic advantages and biases have enabled big capitalist farms to control more of the world’s farmland and food supplies. But the share of food supply produced by smallholder producers is far from settled.

While more pronounced in rich countries, large corporate farms have also been growing in many developing countries. Even where family farming is predominant, increasing farm sizes have been apparent.

The study rightly notes the need to consider different types of farms in making appropriate policies for family farms of various sizes. This is necessary to better formulate policies to address poverty and livelihoods, especially for smallholder producers in distress.

It even suggests the need to “hold large scale and corporate agriculture accountable for the negative externalities of their production (for example on the environment)”. Besides better farming data, farmland concentration and its many implications in various parts of the world should be more appropriately addressed.

Vikas Rawal is Professor of Economics at the Centre for Economic Studies and Planning, Jawaharlal Nehru University, New Delhi. He has conducted field research on agrarian relations in different parts of India for three decades, and works on global agricultural development challenges. Inter alia, he was lead author of The Global Economy of Pulses (FAO).