Putin’s war on Ukraine could spark a nuclear catastrophe

Nuclear war is not the only threat. Ukraine has 15 nuclear power reactors at four facilities around the country, as well as the deactivated reactors at the Chernobyl nuclear disaster site. 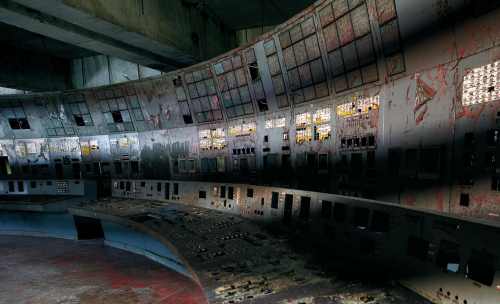 Death and destruction have descended on Ukraine as Russia’s invasion continues into its second week. The invasion has killed thousands and created the largest refugee crisis in Europe since WWII, with over one million Ukrainians fleeing to Poland, Romania, Moldova and beyond. Russia’s invasion could trigger further catastrophes, including a meltdown of one of Ukraine’s 15 nuclear reactors, or even the unimaginable, nuclear war.

As Russian forces began attacking on February 24th, President Vladimir Putin issued a warning to any nation contemplating intervention, clearly threatening nuclear retaliation: “Russia will respond immediately, and the consequences will be such as you have never seen in your entire history.”

The situation worsened days later, when, with sanctions against Russia mounting and its invasion faltering, Putin put his nation’s nuclear forces on “special combat readiness.” The United States did not reply in kind, and canceled a scheduled ballistic missile test out of caution.

Belarus, which is actively participating with Russia in the invasion, held a nationwide referendum, widely described as rigged, which reversed Belarus’s long-standing neutrality and non-nuclear status. Belarus President Alexander Lukashenko, a Putin ally who is described as “Europe’s last dictator,” has signaled he’s willing to host Russian nuclear missiles in Belarus.

The Bulletin of Atomic Scientists recently estimated that Russia has 4,477 nuclear warheads, of which 1,588 are deployed on ballistic missiles, on long-range bombers, or on submarines, ready to launch on a moment’s notice. As the U.S. has roughly the same number of warheads as Russia, both countries have enough nuclear firepower to destroy human civilization (such as it is) many times over.

“We have found it almost impossible to imagine, 30 years after the end of the Cold War, that there could be a nuclear war between the United States and Russia,” Dr. Ira Helfand, the former president of International Physicians for the Prevention of Nuclear War and co-founder and past president of Physicians for Social Responsibility, said on the Democracy Now! news hour. “The crisis in Ukraine is putting that possibility on the table again. If the conflict there spreads, if NATO and Russia get drawn into active combat, both of these blocs have in their military doctrine provision for the use of nuclear weapons if things are not going well in a conventional war.”

Dr. Helfand went on to describe the “nuclear winter” that would follow an all-out nuclear war, when ash filling the atmosphere would block the sun, causing temperatures to plunge: “The ecosystems which have evolved in the last 10,000 years would collapse, food production would stop, and the vast majority of the human race would starve to death.”

Nuclear war is not the only threat. Ukraine has 15 nuclear power reactors at four facilities around the country, as well as the deactivated reactors at the Chernobyl nuclear disaster site. In 1986, one of Chernobyl’s four reactors exploded, precipitating the worst nuclear accident in history. Last week, Russian forces captured the Chernobyl site, presumably to open the highly contaminated “Chernobyl Exclusion Zone” for their military drive to Kyiv, the Ukrainian capital. The Russians are reportedly demanding the Ukrainian staff there continue their work keeping the long-shuttered nuclear disaster site safe. Increased levels of gamma radiation were temporarily detected at Chernobyl, attributed to the disturbance of radioactive topsoil by the hundreds of heavy Russian military vehicles passing through en route to lay siege to Kyiv.

Another enormous risk lies in the potential disruption to Ukraine’s 15 operational nuclear plants. As Greenpeace detailed in a paper released on Wednesday on the vulnerability of nuclear plants during war, nuclear reactors and spent fuel reserves require flawless, continuous operation of complex energy- and water-intensive systems to properly cool the reactors to avoid meltdowns and explosions. Anything from an indiscriminately fired artillery shell to collapse of the power grid could precipitate a nuclear disaster surpassing those that befell Chernobyl or Fukushima, Japan.

On Wednesday, Russian officials informed the International Atomic Energy Agency that its military controlled the territory around Ukraine’s Zaporizhzhia Nuclear Power Plant, the largest nuclear facility in Europe. Despite that, reports indicate that hundreds of workers and others successfully blocked access to the plant with their bodies and vehicle barricades. It is currently unclear who is in control of the Zaporizhzhia plant.

“Are we on the brink of World War III?” a reporter from Al Jazeera asked Russian Foreign Minister Sergei Lavrov this week. “The Third World War can only be nuclear,” Lavrov replied.

This week, Ichiro Ogasawara, Japan’s ambassador to the UN’s Conference on Disarmament offered a warning: “As the only country to have suffered atomic bombings during war, Japan is fully aware of the catastrophic humanitarian consequences of the use of nuclear weapons…such tragedy must never be repeated again.”

The original content of this program is licensed under a Creative Commons Attribution-Noncommercial-No Derivative Works 3.0 United States License.