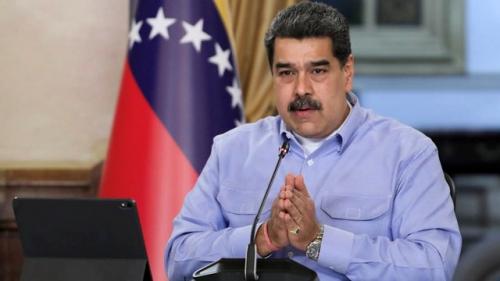 Venezuelan President Nicolás Maduro, on Monday, March 7, announced the reactivation of the dialogue and negotiation process with the platform of far-right opposition sectors in favor of the economic recovery and stability of the country. Additionally, the president reported that on March 5, he held a meeting with a delegation from the government of his counterpart from the United States, Joe Biden. Maduro made the announcements during a meeting with his vice presidents, ministers, and military high command at the Miraflores Palace.

The dialogue between the socialist government of President Nicolas Maduro and the opposition led by US-backed Juan Guaidó, which began in Mexico in August 2021, had been suspended since October 2021. After the illegal detention and extradition of Venezuela’s special diplomatic envoy, Alex Saab, to the United States from Cape Verde, the Venezuelan government had suspended its participation in the dialogues “as a profound expression of our protest against the brutal aggression.”

In the three rounds of dialogue, the government and the opposition reached important agreements. In August 2021, they signed a Memorandum of Understanding for Dialogue. In September 2021, they signed two agreements, recognizing Venezuela’s sovereignty over Guayana Esequiba and establishing mechanisms to recover Venezuela’s resources overseas to support the population amid the COVID-19 pandemic.

With respect to the meeting with the US government officials, the head of state said that “it was a very diplomatic meeting and we spent almost two hours talking,” and added that the meeting took place in a “respectful” and “cordial” environment. He reported that he was accompanied by Jorge Rodríguez (president of the National Assembly) and the first lady, Cilia Flores (deputy) in the meeting. He added that “we have agreed to work on an agenda moving forward, I found it a very important face to face interaction about issues of interest to Venezuela and the world.”

Likewise, Maduro ratified Venezuela’s willingness to advance with diplomacy and respect in an agenda that guarantees peace and security for the peoples of the region. In this regard, he highlighted that “conversations, coordination, and a positive agenda between the US government and the Bolivarian Republic of Venezuela will continue.”

The Bolivarian Republic broke diplomatic relations with the US in January 2019, following the recognition of the Donald Trump administration (2017-2021) to the self-proclamation of then-deputy Juan Guaidó as Venezuela’s interim president.

On Monday, the Biden administration also affirmed that US officials traveled to Venezuela and established contacts with the Venezuelan government, presided over by Nicolás Maduro. At a press conference, the White House spokeswoman, Jen Psaki, admitted that there was “a dialogue with members of the administration in the past few days, and negotiations are open.” She added that the purpose of the trip included “energy security,” and “finding out about the well-being of detained United States citizens.”

According to the right-wing Spanish newspaper ABC, which cited sources who requested anonymity, the White House is considering to partially lift the “sanctions” on Venezuelan crude oil, and for this reason, it sent officials to Venezuela.

After imposing unprecedented sanctions on Russia in recent days over the crisis in Ukraine, including blocking all Russian-exported fuel, the US has lost a key supplier of oil. The inflation and upcoming legislative elections in the country has forced the US to review its policies on Venezuela.

In 2019, Trump’s government tightened the financial blockade against Venezuela in the form of an energy embargo. Following the unilateral sanctions, Venezuela has been able to produce around 760,000 barrels of oil a day with the help of its partners (China and Russia, among others). According to the analysts quoted by ABC, without the coercive measures, Venezuela could produce around 1.2 million barrels per day.

Conservatives from the US and Venezuela’s neighbor Colombia rejected the warming of relations between the two countries. Marco Rubio tweeted “The United States does not need one drop of oil from Maduro, we can produce more than enough here if Biden allows it.” The former Colombian ambassador to the United States Francisco Santos called on Colombian President Iván Duque to raise objections to the White House’s recent meeting with Venezuela in his upcoming visit to Washington.