Thousands of Brazilians 'stand for the earth' against anti-environment bills

Legendary musician Caetano Veloso warned the proposed legislation "could facilitate deforestation and mining of Indigenous lands and unprotected the forest against land-grabbing and criminals." 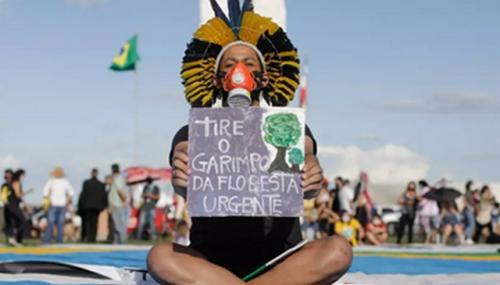 Thousands of Brazilians, including environmental activists and some of the country's most well-known musicians, gathered in the capital Brasília Wednesday afternoon to protest a series of proposed laws that would facilitate mining and deforestation on Indigenous lands.

Rallying under the banner #AtoPelaTerra—Stand for the Earth—the demonstrators decried what they called the "destruction package" of five bills before the National Congress that, if passed, will make Brazil "one of the biggest climate pariahs in the world," according to protest organizers.

"They have the power and the ink of the pen, but we have the ink of urucum and jenipapo," Indigenous activist Célia Xakriabá told demonstrators, referring to fruits used to make traditional decorative dyes.

The bills before the country's Congress are backed by right-wing President Jair Bolsonaro—a self-described "Captain Chainsaw" and climate skeptic—and, if passed, would allow mining on Indigenous lands, relax restrictions on the use of pesticides, and, according to opponents, greenlight illegal logging and land seizures.

"Democracy, human rights, the environment, and the health of the Brazilian population... have been under incessant attack since Jair Bolsonaro assumed the presidency of the republic," Articulação dos Povos Indígenas do Brasil Apoie (APIB), a national advocacy coalition, said in a statement. "Today, Brazil is a poorer, more violent, and more unequal country, whose government threatens the lives of its citizens and the country's socio-environmental heritage."

All indicators show a tragic setback: deforestation, greenhouse gas emissions, loss of sociobiodiversity, land-grabbing, degradation of protected areas, invasions of Indigenous and quilombola territories, food poisoning, violence, and criminalization against traditional and peasant populations, especially women and Blacks. The Amazon and other national biomes are being destroyed. All of this stems from the actions and speeches of Bolsonaro and his supporters. But this situation may not only get worse, but also become eternal, if the National Congress decides to definitively ally itself with the president in his crusade against the country and the planet.

"Each of these projects takes away from Brazilians a piece of their future," the statement added. "To reward a handful of criminals, they condemn ecosystems, rural settlements, Indigenous people, and quilombolas. They widen the chasm of inequality. They plunge our economy into backwardness and external disrepute and make Brazil a global climate risk. We demand that bills that negatively affect the environment, climate, and human rights not be passed."

Legendary musician Caetano Veloso, a co-founder of the Tropicalismo movement and longtime political activist, said during a hearing before the National Congress that "this series of bills could make the situation even more serious if approved. They could facilitate deforestation and mining of Indigenous lands and unprotected the forest against land-grabbing and criminals."

At the end of his speech, Veloso led attendees in a sing-along of his 1978 song "Terra."

Other renowned musicians including Daniela Mercury, Seu Jorge, and Duda Beat were present at the hearing and demonstration, where some of them addressed the crowd of protesters.

"We are here to ask for the brakes on these bills," said Mercury. "We want the forest standing... and we are here to say that civil society does not agree that these bills should go forward."

Outside at the demonstration, Eliete Paraguassu, a shellfisher and activist and from the Afro-Brazilian community of Ilha de Maré in Salvador, Bahia, appealed to all Brazilians to stand up for the Earth.

"The environment is not only the duty of traditional communities to defend," she said, "but of the whole society."

Renato Roseno, a Socialism and Liberty Party state deputy from Ceará, said he was attending the protest because he is "against the destruction package, which will put more poison on the table of Brazilians, legalize land-grabbing on public lands, and authorize mining in Indigenous lands."

The protest comes two days after the publication of a study showing the resiliency of the Amazon rainforest has been declining over the past two decades amid climate-driven droughts and wildfires, and that the crucial ecosystem is heading toward a "tipping point" from which it might not be able to recover.