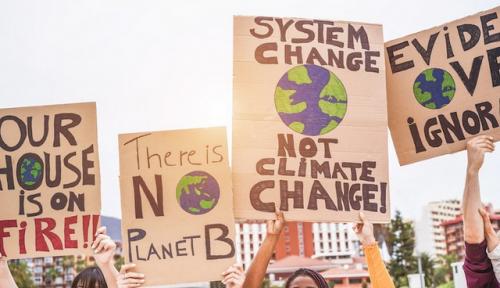 Washington, DC – Law students, and allies protested outside the offices of Gibson, Dunn & Crutcher in Washington, D.C., New York City, and San Francisco to hold the multi-billion dollar firm accountable for its work to advance the climate crisis and attack the wellbeing of Indigenous children and families.

“This protest represents a renewed call for Gibson Dunn and its ilk to articulate and adopt an ethical standard for their fossil fuel and environmental justice work, which has so far been met with silence,” said Grecia Nuñez, a second-year law student at American University Washington College of Law. “Law students across the country have responded to this failure by boycotting Gibson Dunn as an employer.”

Protests outside law firm offices are extremely rare, but the organizers sought to draw attention to Gibson Dunn’s, particularly objectionable record and repeated failure to respond to their demands. Law Students for Climate Accountability (LSCA) – a national organization that has worked with law students at over 50 law schools – first called on Gibson Dunn to articulate an ethical standard for its fossil fuel work in April 2021. Eighty-seven law student organizations signed onto that call in under a month, the largest law student mobilization targeting a law firm in recent memory. After Gibson Dunn’s failure to respond to the call, LSCA delivered the letter and signatures to the firm’s Washington D.C. office. Given Gibson Dunn’s continued refusal to articulate any ethical standard guiding its fossil fuel work, LSCA launched a law student boycott of Gibson Dunn in December 2021.

A number of allies joined LSCA in organizing the event. In their comments, they highlighted Gibson Dunn’s use of aggressive and improper tactics.

“The lawyers at Gibson, Dunn & Crutcher seem proud of their tactics to deny justice to communities harmed by large corporations like Chevron,” said Paul Paz y Miño, Associate Director of Amazon Watch. “They have built their reputation, not on helping defend their clients on the merits of their cases, but on underhanded, and as we have argued – unethical, and even illegal practices to try to invalidate cases by attacking their opponents. The climate justice movement is at a critical moment, and communities harmed by corporations must have the right to defend themselves and hold corporate interests accountable. Gibson Dunn’s practices undermine the rule of law in order to defend the wealthy at the expense of disempowered people and communities.”

The protest took place in a hybrid format with in-person actions outside Gibson Dunn offices connected by a live stream. The primary action took place at Gibson Dunn’s D.C. office on Monday morning, while a group of law students and allies simultaneously protested in front of the firm’s New York City office. A further group of law students and allies protested outside Gibson Dunn’s San Francisco office on Friday, and a video from that protest was screened as part of the live stream on Monday.

The speakers also objected to the judicial nomination of Jennifer Rearden. Rearden, first nominated by President Donald Trump, was again nominated as a district judge for the Southern District of New York in January. Over 180 organizations have signed a letter opposing her confirmation. Opponents of Rearden’s confirmation pointed both to the work she has conducted personally – including work defending housing discrimination and tobacco companies – and her shared responsibility for the totality of the firm’s work due to her position as a partner.

“Gibson Dunn’s egregious record includes helping Chevron evade paying a judgment for dumping billions of gallons of toxic waste in indigenous communities in Ecuador, working to protect Chevron in over a dozen climate accountability lawsuits, and litigating in support of the Dakota Access Pipeline,” says Marjan Kris Abubo, a third-year law student at UC Davis School of Law. “Even Gibson Dunn’s pro bono work has been harmful to indigenous communities: Gibson Dunn is soon headed to the Supreme Court in their Brackeen case, in which they are fighting to gut the Indian Child Welfare Act.”

Gibson Dunn has repeatedly faced rebuke for its work. Courts have found that Gibson Dunn attorneys engaged in “unacceptable shenanigans” and said the firm’s “use of the judicial system amounts to legal thuggery.” In LSCA’s annual Law Firm Climate Change Scorecard, which is widely circulated among law students prior to law firm recruitment each summer, Gibson Dunn has consistently received an “F,” the worst grade. The 2021 Scorecard found it had conducted the second-most litigation exacerbating climate change of any law firm.

- Amazon Watch is a nonprofit organization founded in 1996 to protect the rainforest and advance the rights of Indigenous peoples in the Amazon Basin.