The vacancy motion presented by the opposition party Popular Renewal against leftist President Pedro Castillo failed to gain the votes necessary to oust him. 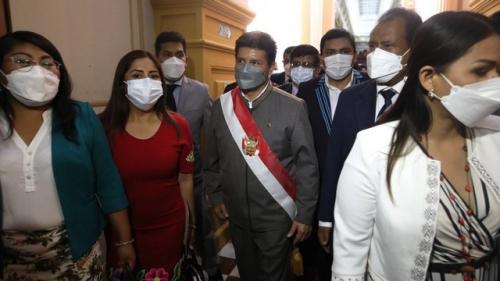 On March 28, the plenary session of the Peruvian Congress met to debate the vacancy motion against President Pedro Castillo, which was presented by the right-wing opposition Popular Renewal party on March 8. After over 8 hours of intense debate, as anticipated, the unicameral parliament voted to reject the motion that sought the removal of the leftist president from office. Only 55 of the 130 legislators voted in favor of impeachment. 54 voted against, 19 abstained and two were absent during voting. The president’s critics needed 87 votes to oust Castillo, who stood accused of corruption and moral incapacity to govern, among other charges.

The plenary began with President Castillo’s defense address. He himself appeared before the legislature to exercise his right to defense, a process that could have been conducted by his lawyer. During his brief speech, Castillo said that he decided to go to the Congress to “show maximum respect for the constitutional state and its control tools” and that his fight “is not for power, which is temporary,” but instead “to serve the country.” Although Castillo didn’t stay for the whole session and asked his lawyer to respond to the accusations, he rejected them all.

In his defense, Castillo stated that the vacancy motion against him had no valid basis, and that it was a “compilation of versions of a section of the press, statements without any corroboration, speculation and imaginary links without support in the facts.” He pointed out that 4 of the 20 accusations had already been discussed and discarded by the Parliament during the rejection of the first vacancy motion. He added that he was being blamed for acts that he did not carry out and that the accusations themselves referred to a third person.

Castillo also pointed out that the vacancy motion has become, since his election, a “central point of the political and journalistic agenda, which should not continue.” He stressed that the rejection of the motion would not mean the end of the ongoing investigations and ratified his will to continue collaborating with the investigations related to alleged corruption and other charges. Finally, Castillo called on the legislators to “abandon the environment of turbulence” and “work together to combat the true enemies of the country: corruption, poverty, discrimination, inequality, insecurity, violence against women.”

Following the rejection of the vacancy motion, Castillo welcomed the decision of the parliamentarians and once again called on them to work together for the benefit of the country. “I salute that good sense, responsibility and democracy have prevailed. I recognize the parliamentarians who voted against the vacancy, and I respect the decision of those who voted in favor. I call on everyone to close this page and work together for the country’s great challenges,” tweeted Castillo.

In addition to the ruling Free Peru party and its allies Together for Peru and Democratic Peru, which hold 44 of the 130 seats, various legislators of the center-right We Are Peru and Alliance for Progress parties also voted against the motion and in defense of the stability of the country. Meanwhile, all the legislators of the far-right Popular Force, Popular Renewal and Go on Country parties, among other center-right parties, voted in favor of the vacancy.

The members of the ruling coalition celebrated the failure of the vacancy, and called on the opposition for agreement. Meanwhile, the main promoter of the vacancy motion, Jorge Montoya, declared that his bloc would investigate the motives of the 19 legislators who voted in abstention, indicating that there would be another attempt to remove Castillo.

This was the second vacancy motion against Castillo since he took office eight months ago. It was approved for debate with 76 votes in favor, 41 against, one abstention and 12 absent, on March 14. The first vacancy motion, which was presented in November 2021 by the Popular Force, Popular Renewal, and Go on Country parties, failed to garner enough votes to be admitted to the Congress in December 2021.