War in Ukraine: will there be a winner?

Making matters most difficult is the fog of tricked-out misinformation flowing from all sides, reminding us of how capitalism has corrupted, vulgarized, and juvenilized the occupation of journalism. 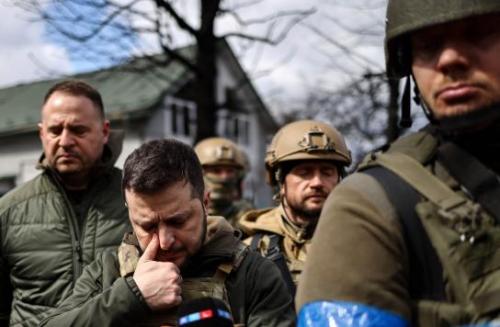 While debates rage unproductively over which side to support in the Ukraine war, the larger questions of who will ultimately gain and who will lose are becoming clearer.

Making matters most difficult is the fog of tricked-out misinformation flowing from all sides, reminding us of how capitalism has corrupted, vulgarized, and juvenilized the occupation of journalism.

At times in the twentieth century, there was a small, elite cell of adventuresome journalists who would draw satisfaction from risking life and limb to offer eye-witness accounts counter to the official narrative. A careful reader could allow for class bias, editorial meddling, and euphemism to construct a credible, independent picture of events or incidents.

Today, the number of independent journalists in that tradition can be counted on the digits of one or two limbs.

No one is sneaking into Mariupol to check on Ukrainian atrocity claims or sampling Russian death notices to challenge official numbers. Reports of military encounters are simply taken from government press releases or news conferences from the Ukrainian Ministries, NATO, or the Russian Ministry of Defense. The mainstream media is surfacing no Seymour Hershs or David Halberstrams. If they arose today, they would be summarily banished to celebrity chasing. Consequently, little is reported of high confidence, neither atrocity nor heroism.

To make matters worse, the swarm of “expert” commentators make little effort to place events in any context, historical or otherwise. We don’t know where the level of fighting, military progress and competence, civilian casualties, or physical destruction stand in relation to other recent wars or confrontations (for example, US or NATO wars) or in relation to reasonable expectations. We only have unsupported generalities and emotional, unsupported charges of “genocide,” “brutality,” or “war crimes.”

Nevertheless, we can avoid succumbing to wild media exaggerations while also drawing some useful conclusions from facts that are uncontested.

It is uncontested that Russia has, after a month of fighting, revised its plan, downscaling its goals. The Russian government has so stated. That fact implies that its initial plan was not successful, which implies, in turn, that the government misjudged the military balance of forces. The Ukrainian resistance was stronger, the Russian attackers were weaker, or both.

We can only speculate whether Russian military leaders thought that they would be met as liberators, that internal allies would rise up, that the West would offer no assistance, or that the Ukrainian military was decisively weaker than it proved to be. In any case, the war continues, with thousands, perhaps ten of thousands, dead and millions driven from their homes.

You don’t have to fall for the Western media circus that, like the skillful British propagandists of the 1914 War, depict the adversary as bloodthirsty rapists, pillagers, and child killers, to recognize that the public relations campaign for the hearts and minds of the West has been won by the US, NATO, and Ukraine.

The Blinken/Nuland State Department has successfully used a compliant media to shepherd the more level-headed, practical, and hesitant politicians in Germany, France, and Italy into joining the ultra-nationalist Eastern European Russia-haters in a crusade against Russia. Europe is now more militantly aligned against Russia than at any time since the height of the Cold War. Military budgets are swelling and economic, social, and diplomatic ties with Russia have been severed, with the US energy sector and war-making industry the biggest winner.

If US policy was to bait Russia into intervention-- and I think it was-- then the trap succeeded.

Whatever security goals the Russian government sought, the best that they will get are treaty guarantees that have no more gravitas with successive Ukrainian governments than the vague assurances of the past. A poor country armed with aged Soviet weaponry is now armed to the teeth with many of the latest and most effective NATO instruments of war.

Understandable concerns over the growing influence of ultra-nationalist Stepan Bandera admirers and the thugs and gangs that embrace Bandera’s World War II Nazi collaboration will now only grow with their further acceptance and integration into Ukrainian resistance to the invasion. The invasion has actually legitimized their role in fighting the Russian invaders, deflecting from their history of terrorism-- the opposite outcome from that projected by the Russian government in its explanations.

An already dubious democracy, Ukraine has stepped back, outlawing eleven opposition parties, including the Communist Party. It has condoned the harassment of Russian speakers and charged many with sabotage and betrayal.

The US’s favored war-by-other-means strategy-- comprehensive sanctions-- has cost Russia dearly, beginning with the killing of the Nord Stream II pipeline. Weaponizing sanctions to accomplish foreign policy goals has become a highly effective way for the US to impose its will. The US government manufactures warrants for sanctions for reasons often beyond ridiculous (the charge of “terrorism,” for example, is made and then instantly withdrawn with no evidence of changed behavior). Those sanctioned may even include parents or children of “bad” actors, a cruel application of kin punishment.

What is truly astonishing is how the US administration secured the collaboration of European leaders in approving sanctions against Russia that actually harm Europe more than Russia! Undoubtedly, this kind of distorted “unity” will rebound badly on both the US and the EU.

It must be noted that imperialist war always immediately benefits the participating leaders by distracting from their failings and rallying support around patriotic appeals. In this regard, Putin, Zalensky, Biden, and the other NATO leaders all drank from the cup of imperialist opportunism.

In the short run, Putin appears to be the determined defender of Greater Russian interests, Zalensky the heroic underdog facing the Russian Bear, and Biden the indignant defender of the cause of self-determination. But Putin and Zalensky have fat in the fire, necessitating an endgame before casualties, costs, or opposition grow too much. Only Biden benefits from an extended war, though his NATO allies may wake up to their sacrifices for US foreign policy aims.

As a wave of inflation follows the latest wave of COVID, threatening to further hammer the global economy and further erode living standards, attention is drawn from the failure of bourgeois politicians to offer all but the lamest of solutions to a war promising little but pain for the world’s workers.

As always, imperialist war only benefits the weapons purveyors and the predatory corporations, while bringing tragedy to the working classes. We must refuse to participate in our own destruction