There is a budget for war, but not for the planet. The climate situation requires immediate action, and the G7 must seize this window of opportunity before climate changes become irreversible.

The Intergovernmental Panel on Climate Change ((IPCC) published Group II's contribution to the Sixth Assessment Report on Climate Change in February 2022. With an emphasis on adaptation and vulnerability, this report seeks to warn of the consequences of climate change without decisive action shortly. In face of this, the G7 is more prepared for war than for the planet.

Human-induced climate change has pushed ecosystems beyond their capacity to adapt. Antarctica reached record temperatures during an unprecedented heatwave despite being known as the coldest spot on the planet. Around the Concordia research station, the temperature reached -11.5° Celsius; while not a warm temperature as such, it is 38° Celsius above the usual for the area. The report is confident that climate change has harmed people's health (both physical and mental). From the rise in food and water-borne diseases due to extreme heat to psychological trauma, victims of natural disasters or loss of culture and quality of cultural life relate to weather events. About 3.3 billion people worldwide are vulnerable to climate change, which means that 4 out of 10 people on the planet suffer first-hand the consequences of environmental damage.

The effects of climate change come in the form of more violent storms, rising sea levels, acidification of the oceans, loss of marine wildlife in fresh and salt waters, droughts, landslides, the disappearance of various species on land, increased fires and weather extremes, and, consequently, uncertainty in food and water security for humanity.

As reported in previous notes, the Paris Agreement aims to keep global temperatures from rising by no more than 1.5°C to avoid significant biodiversity loss. Already having risen by 1.1°C, the IPCC recommendations assume the temperature will reach the ceiling in the remainder of the decade. UN Secretary-General António Guterres said that ignoring the current state of the environment and delaying any climate action would only be a death sentence for humanity. He said it was essential that fossil fuels phase out once and for all and that it was necessary to look to renewable energies as the "only way forward." 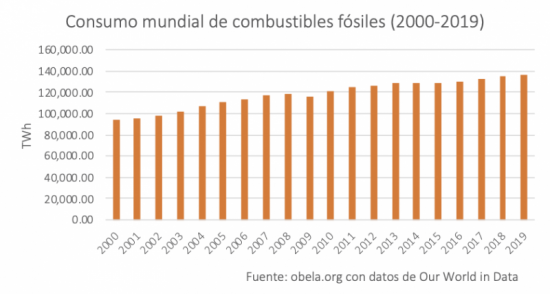 This decade is crucial for moving away from the use of fossil fuels. According to the International Institute for Sustainable Development, rich countries must end oil and gas production by 2034 if they do not want to exceed the 1.5° C ceiling. The richest, which produce more than a third of the world's oil and gas, must cut production by 74 percent by 2030. The poorest, which supply just one-ninth of global demand, must cut it by 14%. The remaining medium producers will have to cut production by 43-18%.  However, as we can see from the graph, consumption does not seem to be falling and is unlikely to do so shortly. For example, Russia and the United States plan to increase their oil production over the next few years, meaning the decline in fuel consumption is not close.

“Adaptation planning” is now part of the discourse as the effects of a 1.5°C temperature rise cannot be curbed. Still, improvements can make the adverse effects less (or at least not as harmful) and take advantage of emerging opportunities. To this end, public and political awareness of climate change is crucial. The next ten to twenty years is of utmost importance for the planet. CO2 emissions must fall steadily to affect air quality positively, but even in that scenario, it would take another three decades for the earth to return to average temperatures.

The report is a stark review of the dangers of climate change, leading to increased impacts on people, settlements, and infrastructure. Climate change already affects the human and natural systems, but decisions made in the coming years will determine the extent of these impacts. It is unfair that the countries that pollute the most ignore the climate issue when they are responsible for environmental degradation. The rich countries mobilised vast amounts of money in armaments for the war in Europe but refused to allocate environmental care resources. The G7 group promised 100 million dollars a year for emerging countries to mitigate the effects of the climate crisis (an amount that never arrived). The United States alone created an aid fund for Ukraine of 1.4 billion dollars. There is a budget for war, but not for the planet. The climate situation requires immediate action, and the G7 must seize this window of opportunity before climate changes become irreversible.