"In the fight to hold Big Tech responsible for their wrongdoing, we are at a historic must-win moment," said one advocate. 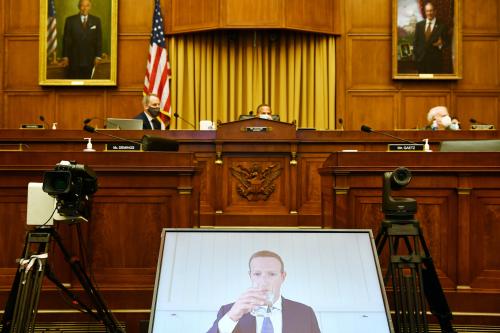 More than 100 advocacy groups were joined by some of Silicon Valley's smaller tech companies Monday as they launched Antitrust Day, a day of action aimed at pressuring federal lawmakers to pass legislation that would rein in tech giants which advocates say "pose an existential threat to democracy" as they stifle competition and disempower consumers.

Groups including Fight for the Future, Electronic Frontier Foundation (EFF), and Demand Progress are joining with Yelp, Patreon, DuckDuckGo, and other internet companies to push for the passage of two bills that would "increase competition, giving tech users more control over their digital lives, and reduce the monopoly power of Big Tech giants, which has been abused as a choke point for censorship and human rights violations," according to organizers.

"In the fight to hold Big Tech responsible for their wrongdoing, we are at a historic must-win moment," said Sacha Haworth, executive director of the Tech Oversight Project. "In order to hold companies like Google, Apple, Facebook, and Amazon accountable for predatory practices, spreading disinformation, misusing people's most personal data, and targeting children... we need to pass antitrust reform right now. The American Innovation and Choice Online Act and the Open App Markets Act will level the playing field and ensure that Big Tech can no longer operate unchecked."

"When we pay hundreds of dollars for a device, we should have more of a say in what we can do with it," said EFF. "We should get to change the default apps. We definitely should be able to remove the apps it comes with. And we should not be restricted solely to the apps that the company that made our phone thinks we should have."

The American Innovation and Choice Online Act (AICOA), also known as H.R. 3816 and S. 2992, would prevent powerful platforms from favoring their own products and services, discriminating against businesses and harming competition, or requiring businesses to buy a platform's goods or services for preferred placement, among other anti-competitive practices.

The bill would take aim at companies which own platforms and compete with smaller companies on those same platforms, like Facebook, Amazon, Apple, and Google—companies that are "riven with conflicts of interest," as Fordham University School of Law professor Zephyr Teachout told Protocol in 2020.

"They own platforms and compete on the platforms, so Congress should pass a law delineating single-minded business rules for the very biggest tech companies," Teachout said.

Tech companies including Yelp and search engine DuckDuckGo have publicly demonstrated their support for the day of action. The former company's app on Monday greeted users with a prominent link to AntitrustDay.org and urged them to push lawmakers to vote for the bills, while the latter displayed the message "Tell Congress you want [ctrl]" on its homepage.

"For too long, dominant tech companies like Google have employed anti-competitive tactics to stifle rivals and protect their status in the digital market," said Katie McInnis, senior public policy manager at  DuckDuckGo. "These self-preferencing tactics harm competition as well as consumers, as they deprive us of the innovations a competitive market would bring and make it hard for users to choose the services they want."

Digital rights groups argue that anti-competitive behavior by companies like Facebook and Apple has serious consequences for human rights.

"All it takes for a government to silence millions is an email to Apple—whether it's to ban VPNs, news apps, voter guides, or encrypted messengers," Fight for the Future writes at its campaign website FreeTheiPhone.com. "Dictators don't need expensive censorship infrastructure when Apple wields such complete control and will censor for them."

At AntitrustDay.org, Fight for the Future and other groups are calling on consumers to write to their representatives to demand passage of the two bills, which will face floor votes in the coming weeks and which have bipartisan support.

The Tech Oversight Project sent a truck displaying a cartoon showing antitrust legislation on its way to a vote in Congress to Capitol Hill, where Sen. Elizabeth Warren (D-Mass.) joined the group.

On Monday evening, a group of artists called The Illuminator will project the message "Monopolies hurt democracy, monopolies drive inequality, monopolies must go" in Washington, D.C. The projection will be visible to people commuting home from Capitol Hill, the group said.

"We are approaching a make-or-break moment for revitalizing our democracy and restoring fair competition to our economy," said Maria Langholz, communications director for  Demand Progress. "Congress has a critical role to play in modernizing antitrust enforcement to rein in the power of modern-day monopolies like Amazon and Facebook/Meta. We are mobilizing our members on this day of action because the window for reining in Big Tech's dominance may soon be closing."