Surpluses from the United States are sold in the international market at Dumping prices, an illegal predatory practice used to destroy the economy and the national production of the countries that receive it. 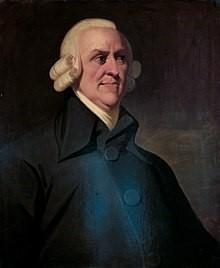 The first and most serious confusion is to confuse money with wealth and money with capital.

Marxism is not the subject of this title. Marxism, in the end, is the only ideology that fulfills its objective; a classless society: all poor.

The liberal theory as taught in the faculties of economics is wrong. They say Adam Smith is the father of economic liberalism and laissez faire. Smith made the most important discovery on which the other schools are based.

Smith is also credited with discovering trade based on natural advantages. That idea was already developed in the letter signed by Elisabeth I addressed to the rulers of the Spice Islands that was carried by Mr. Lancaster, captain of the first expedition to the Far East (1610) of the English East India Company, a company notable for having been the private owner of an Empire. His ship's flag, red and white striped with a box in the upper left corner for the Union Jack, obviously inspired that of the United States.

Laissez Faire has nothing to do with the Anglo-Saxon liberal school, it is a French statement of the Physiocratic school of Quesnay. This term appears linked with Liberalism in the United States to reject the intervention of the State in the economy, taken up by the arguments of the Austrian School (Von Misses and Von Hayek) taken up by Friedman in Chicago with the banner of Neoliberalism. North American economic liberalism argues using physiocratic principles (such as the Laissez passer) against the protection by the State of national production and against the customs wars (Mercantilism), in the years 1920/30. Both coincide in being used against the principles of social equity imparted from the State that announces the New Deal. The Laissez Passer idea is preached to America's trading partners.

I mention these origins to give an idea of the doctrinal cocktail that contaminated the pure Ricardian liberalism that only seeks to enrich the rich.

The greatest of the absurdities comes from the Frenchman Jean Baptiste Say, that was imposed as an economic truth in the Anglo-Saxon world because it was endorsed by David Ricardo.

Say's nonsense says that every production creates its own demand. Sismondi is the first to denounce it (1819) as contrary to the most elementary economic logic. This lie suits those who are abundant in money and want to get more out of it than simple interest, a very common case in nineteenth-century England.

Say's nonsense (called Say's Law) means that when money is abundant (in the USA the Fed takes care of that) it is invested in facilities to produce something; this turns virtual inorganic money (public debt) to give away to private banks so that they can avoid bankruptcy, under the pretext that they can continue to lend to consumers.

These production surpluses were denounced by Sismondi in 1819, as damaging to the general economy because they are the cause of the cyclical systemic economic crises of Western Capitalism manifested in massive bankruptcies; and bankruptcies cause unemployment. Unemployment contracts the market and that increases surpluses even further. Rosa Luxembourg agrees with Sismondi.

Surpluses from the United States are sold in the international market at Dumping prices (selling below cost). Dumping is an illegal predatory practice used to destroy the economy and the national production of the countries that receive it.

When the national producers go bankrupt, the dumping exporter remains alone in the market and then sets monopolistic prices. That is why the argument that dumping favors the consumer with bargain prices is fallacious, because later they will have to pay the higher price.

For this reason, it is considered a commercial crime that is forbidden by international trade law, that authorizes punishing it with an additional tariff imposed on dumped goods, called anti-dumping tariff.

The overproduction resulting from Supply Side Economics is even supported by subsidies with public money by the U S Government. The United States virtual inorganic money is turned into fixed capital and circulating capital; increasing production without a market; believing wrongly that production alone will create its own demand.

An artificial demand is created by hammering with propaganda and selling on credit; that's why, in the United States, the entire population is very much in debt and there are no savings.

In the end, the consumer, like everyone who lives in debt, cannot pay his mortgage and the banks auction off bad mortgage packages in the stock market that offer the ingenious euphemism known in Wall Street jargon as Subprime Mortgages (garbage mortgages). American banks have flooded Wall Street and Frankfurt with this deception. Houses are auctioned at the same time at below cost prices (dumping) and the properties remain unsold.

We now call this deplorable congenital disorder of Supply Economy “bubbles”. Bubbles are even more contagious than covid. When several bubbles occur at the same time it is called a World Economic Crisis.

It is a phenomenon that feeds on the indebted middle classes of the Third World, who end up on the streets. As this class usually has useful training, they migrate to the First World in search of a subordinate professional job, thereby displacing the local professional and increasing the unemployment of young professionals.

The abundant conversion of virtual money into capitalist investment to produce something for which there is no demand or market, or when it occurs above demand, is called in the United States Supply Side Economics (Supply Economy). According to Sismondi and some Marxists that behavior is the cause of the recurring crises with which North American-style capitalism infects the European economy. There is a palliative that does not cure them, but aggravates them.

The palliative consists of issuing inorganic money (public debt) to give it away to private banks so that they do not fail, under the pretext that they can continue to lend to consumers. This gift to the rich, in the euphemistic jargon of the Fed, is called Quantitative Easing. This Quantitative Facilitation never reaches the consumer; because as gambling addicts always do, the Banks run to the stock markets to inflate their stock with massive purchases. Once artificially inflated and a degree of confidence is restored, the prices deflate again going back into the next crisis.

The most serious case of Dumping damage is in agriculture; because in many developing countries, agriculture is the basis of the economy that provides jobs and livelihood.

Such is the case with cotton. There are 4 African countries for which the cultivation of cotton sustained the life of their rural population, these are: Mali, Benin, Senegal and Burkina Faso.

In Brazil, the producers complained and threatened to abandon cotton cultivation, (although Brazil has many other export crops and cotton is not so important); but Brazil out of solidarity, demonstrated, in Geneva, to a WTO panel; that US cotton sold in the international market is 80% subsidized by the Washington government.

That Washington wants to keep international cotton price below cost, was shown when, after its conviction in the WTO, it refused to eliminate the subsidy and offered to give the cotton producers of Brazil (the accusing country) a subsidy equal to the one it granted to the US producers.

With this procedure it became clear that its purpose is to keep international cotton price so low that its cultivation is abandoned in African countries. So African rural population emigrates and it generates political instability in the region.

First the migrants went to Libya, where they stayed looking to make a new life; because Ghadaffy’s Libya was the most prosperous country in Africa, with a level of social protection and a standard of living similar to that of Europe.

But Libya was destroyed by NATO in an aeronaval offensive in support of a rebellion of Islamic Salafists that began in the city of Benghazi.

Since then, those unfortunate African peasants have been fleeing hunger, fleeing in desperate attempts to reach Europe in precarious boats at the risk of their lives, because the North American dumping of cotton prevents them from living in their homelands.

The European Community, in whose lap and budget the refugees end up falling, should protest before international organizations, due to the social migration crisis caused by the United States to their detriment; but it will not, because since 1944 Europe is a vassal territory to Washington.

The United States is not competitive if it trades without dumping. So it negotiates preferential trade treatment, which it labels as Free Trade. US imposed them on its Latin American partners which undertake to fully open their markets to all United States exports, expressly waiving the application of the anti-dumping duties permitted by the WTO agreements.

Subsidized North American agricultural subsidies uproot Central American rural population which flee its countryside, crossing all of Mesoamerica on foot to reach the United States in search of work and bread.

There is another industrial surplus created by the surplus in inorganic money issued by the Fed.

Much of that virtual inorganic money is invested in arms overproduction which increases international tensions because it creates a weapons surplus. A product whose market is war and destruction.

For this reason, the United States seeks to provokes wars and establishes bases everywhere.

In the weapons surplus case, Dumping is done with bombs, which gives it a literal meaning that kills and destroys throughout the Near East.

A war exercise, in which the United States deliberately destroys civilian communal service facilities essential to a modern civilized life, does that while pretending to fight jihadist militias that it equips and finances under the pretext that they are fighting a dictatorship.

The illegitimate wars that the United States wages in the Near East, in addition to sowing desolation and death to enrich its own arms manufacturers, serve as a pretext to continue creating a surplus production of arms without a previous market, whose bubble, when it explodes, does so with a rainfall of Muslim refugees over Europe. It is always about Muslim refugees rain-falling on Europe