The folly of allowing core aspects of civilised societies to be determined by numerical measurement is clear from the damage that the tyranny of key performance indicators and targets has done to education, hospitals and large companies. 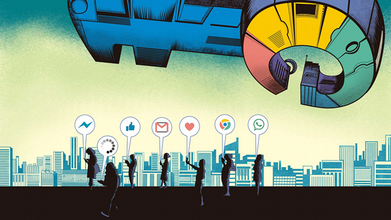 Almost two years into the pandemic, it’s hard to assess the health impact of different countries’ policy interventions. Their social impacts, though, are all too clear: the nursing auxiliaries, care assistants, transport workers, shop assistants, cleaners and so on, hailed as the pandemic’s heroes and applauded on doorsteps in spring 2020, have been cast back into the darkness where the economic order usually consigns them. Despite promises of building a better world post-Covid, one that would value the common good rather than discriminate socially, there’s been no progress in essential service workers’ conditions or status.

What Covid-19 has done, however, is to pave the way to a land of even greater plenty for the tech industry: ‘The five biggest technology companies — Apple, Amazon, Alphabet, Microsoft and Facebook — together made $75bn in after-tax profits in the second quarter, nearly 90 per cent higher than a year before, and 30 per cent more than expected,’ reported a delighted editorial in the Financial Times on 30 July. These results record in accounting terms how much of our daily lives these platforms have claimed — unsurprising, since the policies to tackle the pandemic are built on them.

From lockdowns and remote working to distance learning and ‘health passes’, policy decisions have been based on two unchallenged assumptions. First, normal human interactions, prohibited because of Covid, can migrate online and flourish; the digitisation of social relations is technically possible, and therefore necessary. Work (at least for some), study, entertainment, shopping, communication, meeting new people, culture and healthcare can all move online — along with being monitored via the screen.

The second assumption is that the privately owned tech giants that now structure part of our shared existence need only obey the laws of the market and the terms and conditions their bosses set. They face few requirements or obligations, none of the usual conditions that accompany contracted-out public services. Many Silicon Valley executives feel entitled to sell what the state has stopped providing. In 2017 Facebook founder Mark Zuckerberg laid out his grand vision: ‘building the long-term social infrastructure to bring humanity together’ by strengthening our frayed ‘social fabric’ with ‘likes’. ‘The Facebook community is in a unique position to help prevent harm, assist during a crisis, or come together to rebuild afterwards,’ said Zuckerberg, whose platform has 2.8 billion active users.

Progressive parties and trade unions have raised little objection to government decisions that flow from these two assumptions. When France’s President Macron acknowledged that ‘our country today depends entirely on women and men whom our economies recognise and remunerate very badly,’ it was time to demand that activities essential to collective life be given the protected status of a major public service. That opportunity was squandered. A year on, the French government’s fine words about carers, cleaners and teachers have only strengthened the grip of a tech industry whose core business is selling the antithesis of these human relationships: interactions governed by algorithms and evaluated by encrypted calculations.

Outsourcing social infrastructure to Silicon Valley seems especially bizarre when their founders, almost all of them lonely, uncommunicative, privileged young men, have rarely shown much instinct for caring for others, fulfilling social relationships, warm friendships or collective enthusiasm. Quite the reverse: geek subculture, tinged with introversion and the frustrated masculinity found on video game forums, values a lack of empathy. It reveres a pantheon of gods affected by a mild form of autism, such as libertarian billionaires Elon Musk, boss of Tesla, Peter Thiel, co-founder of PayPal, and many others not officially diagnosed.

In 2001 a journalist from Wired magazine, then the monthly bible of Silicon Valley, went so far as to call Asperger’s ‘geek syndrome’: ‘It’s a familiar joke in the industry that many of the hardcore programmers in IT strongholds like Intel, Adobe, and Silicon Graphics — coming to work early, leaving late, sucking down Big Gulps in their cubicles while they code for hours — are residing somewhere in Asperger’s domain.’ People with this disorder may have profound social difficulties because of their problem grasping the non-verbal communication that forms the background to interpersonal relationships, but sometimes show exceptional ability in their areas of specialist interest.

Government-mandated social distancing during the pandemic, which most humans experienced as a serious privation, was already often the norm for many developers, who are more likely to spend their evenings in socks and sandals coding an app to rate the attractiveness of female students at Harvard than actually chatting with them. Face-to-face conversations are full of ambiguity and unspoken understanding; digital life offers the geeks who developed it the blunt yet reassuring rationality of numerical indicators that keep emotion in its place.

The fact that social networks designed by asocial people have come to shape the online relationships of half the planet is a reflection of a profound degradation of human relationships, and source of limitless frustration in our fragmented, hurried, fearful societies. ‘The self-segregation of modern western societies means that, for many people, conversing with some fellow citizens seems pointless, undesirable or outlandish,’ suggested The Economist on 10 July, referencing a series of surveys on the importance of the age-old but declining practice of talking to strangers. With whole sections of daily life moving online in the name of fighting Covid, this trend is accelerating rapidly.

This latest wave of digitisation feels unbearable to the many people on the receiving end, particularly in education, but it’s hardly surprising, as it’s a continuation and intensification of a long-standing trend: government by numbers. Until the mid-2000s, bonds of friendship, affection, attraction, feelings of curiosity, joy, anger and sorrow still escaped the steamroller of quantitative evaluation that had ruled the economy and military since the mid-20th century. To transform emotions and moods into digital commodities, the geniuses of Silicon Valley first had to make them measurable so they could rank and provoke them and thereby generate personal data. By design, most apps that enable online interaction treat value numerically, whether through using stars, thumbs-ups, followers or hearts.

The folly of allowing core aspects of civilised societies to be determined by numerical measurement is clear from the damage that the tyranny of key performance indicators and targets has done to education, hospitals and large companies. ‘The problem,’ writes Jerry Z Muller in a book on this scourge, ‘is not measurement, but excessive measurement and inappropriate measurement — not metrics, but metric fixation.’ And therefore their prescriptive nature, which prevails at the expense of experience, personal judgment and historical awareness.

Numbers now have an unrivalled, universal power to be adduced as an unassailable justification. Though it was never formally agreed, the media and politicians tell the narrative of the pandemic in figures and graphs hastily ported over from the medical world to the public sphere. The ‘scopic impulse’ — the irresistible desire that drives the browser to keep scrolling to the next image on screen — has a digital counterpart in the anxious wait for the day’s Covid figures: cases, tests, hospitalisations, intensive care beds, vaccination rates, death tolls in the millions.

Every evening, some health expert or other recites a litany of indicators whose composition and relevance are only questioned when they conflict with government plans. Government by numbers bases the legitimacy of its decisions on such rituals, which are echoed in search engine results and newspaper front pages. ‘Flatten the curve’, ‘keep below the threshold’, ‘hit the target’: scores, parameters and dashboards imperceptibly turn life into a point-scoring game, the classic recourse to regulate the conduct of individuals with limited personal sovereignty, as in a kindergarten.

Hypnotised by statistics, human beings may be startled by the idea that this seemingly unquestionable mode of presentation misses — and masks — the essential: the vital need to transform a sick society of which the health crisis is just one symptom.

- Pierre Rimbert is a member of Le Monde diplomatique’s board of directors.