In the context of the Covid-19 pandemic

Regarding pro-migrant organizations and the defense of human rights, support networks and migrant shelters decreased their activity due to Covid19. 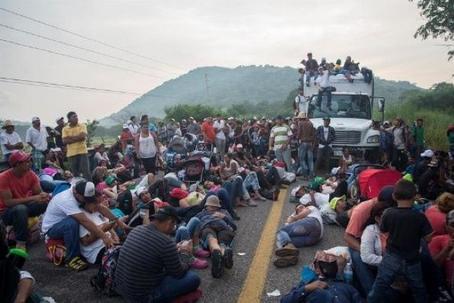 One of the most aggressive faces of neoliberal globalization and its growing inequality are international forced migrations, which frequently go from the South to countries in the global North. These cross-border and irregular human mobilities are produced by multiple processes. On the one hand, there are the structural causes that generate the contexts of expulsion of thousands of people (lack of work, low wages, economic crises, violent environments, impacts of natural disasters), as well as the transnational production dynamics with a high demand for manpower (labor force) in certain countries (which has a constant need for precarious and poorly paid workers). On the other hand, migrations are also constituted by the capacity of action of migrants and the interpellation they make of their adverse living conditions (particularly in relation to the national States of origin, transit and destination that do not recognize them as subjects with rights).

In the Americas, one of the most numerous human mobilities, precarious and exposed to processes of violence, is the one that departs from the countries of the Northern Triangle of Central America and goes to the United States (US) through Mexico. Migrant groups and populations in their transit through Mexican territory suffered and suffer various grievances and aggressions, and, already before the health emergency of the pandemic, Mexico as an articulating country (between Central America and the United States) had for years become a device for immigration containment, in which the processes of externalization of borders were specified (within the framework of the anti-immigrant and criminalization agenda that the Trump administration had imposed in the regions of Central and North America).

However, in the specific context of the first year of the Covid19 pandemic in Mexico, several of these processes only increased and had a greater impact on migrant groups.

Changes in migration in the context of the Covid19 pandemic

According to what is documented by various migrant care organizations (Sin Fronteras, Programa Casa Refugiados, Espacio Migrante Tijuana, among others) and during the first year of the Covid19 pandemic, different changes have occurred in cross-border migrations, which have affected migrants and their support networks, and in which different governments (from the US, Mexico, and Central America) have been involved.

On the one hand, cross-border mobilities and the number of migrants decreased in 2020. However, since the end of 2020 and during 2021, these cross-border mobilities have increased again. In addition, last year saw processes of stigmatization and racism towards migrants, and the increase of their invisibility and vulnerability. There was a socio-material precariousness of the migrants, particularly in the reduction of temporary jobs that allowed them to survive, but also in the decrease in support from pro-migrant organizations and groups (due to the pandemic). This has had a negative effect and has deteriorated the mental health of migrants, in addition to presenting an acute lack of access to health services for these mobile populations.

Regarding pro-migrant organizations and the defense of human rights, support networks and migrant shelters decreased their activity due to Covid19. There was also a reduction and precariousness in the monitoring of civil society organizations on migration and the human rights of migrants. In addition to this, in various shelters in different parts of the country (south, center and north) it was very difficult to guarantee health protocols, and some of them closed, while others reduced their activity. There was also a dynamic of much misinformation.

Finally, and in the framework of that first year of the pandemic (2020), regarding (in) mobility policies, the governments of the United States and Mexico accentuated the policies of restriction and punishment of irregularized cross-border mobility. In this context, generalized arrests took place (with the drastic cases of children and families). In addition, deportation processes were expedited and in certain immigration stations the health security protocols for Covid19 were not guaranteed. Added to this was a temporary suspension of state programs for migrants (refugee applications, among others). All this happened within the framework of the criminalization of migrants and their mobilities, a process of violence underpinned and promoted at the regional level by the anti-immigrant agenda of the then US government of Trump.

Within the framework of the previously described scenarios, and based on what has been documented by different organizations in Mexico (Sin Fronteras, Programa Casa Refugiados, Espacio Migrante Tijuana, among others) in the course of 2020, there are a series of urgent concrete actions:

1) Detention can no longer be the axis of the migration control and deterrence strategy. In this sense, a review of the legal frameworks and administrative procedures towards migrants and refugees is required.

2) It is necessary to create supportive environments (in transit) for migrants and move from humanitarian assistance to the construction of plural and receiving communities.

3) It is urgent to increase the national and international infrastructure of attention to migrants and refugees.

4) A deep understanding of the causes of migration (poverty, political decomposition, violence, environmental impacts) is essential; and more if these causes not only do not change in the context of the pandemic but are even more accentuated.

5) Finally, it is essential to recognize migrants as social and political subjects, and a vision that deliberately assumes the condition of forced migrants and refugees of populations in cross-border mobility, and how they have different needs, projects, and desires.