For the right to an Internet with rights

It is essential to analyse more precisely what are the intentions and processes that underlie the installation of the current techno-digital model, what are its main impacts and its possible future. 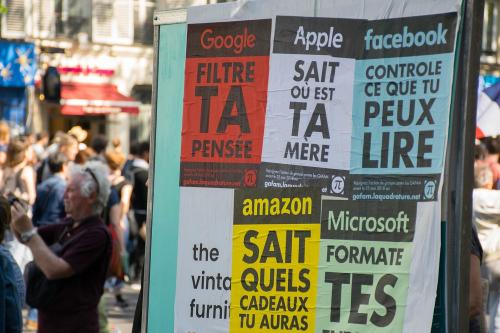 There is no doubt that the era is undergoing a technological revolution, with the irruption of digitalisation in almost all social activities?

The internet, a space so vital to our social interaction, has been mutating in its characteristics, moving away from any possible democratic control and becoming increasingly permeated by corporate mercantile interests. Interests that concentrate power and wealth in a handful of transnational companies that exercise de facto control over the content that circulates on the net.

Yes, the internet and its related technologies, which could ideally serve for a greater democratisation of knowledge and political activity, which could contribute to a better distribution of welfare and the collective heritage of humanity, are intervened by particular monopolistic intentions, which prevent or make it difficult for this to happen.

It is therefore essential to analyse more precisely what are the intentions and processes underlying the installation of this techno-digital model, what are its main impacts and its possible future.

It often happens that processes that have some external similarity, but which are mobilised by different intentions, are confused and assimilated as identical, despite the fact that they constitute different and even opposite historical directions.

Such is the case of processes such as universalisation[1] and globalisation. While the former corresponds to a historical tendency of connection between peoples and cultures, now forming a fully interconnected mosaic of diversity and on the way to a possible Universal Human Nation, globalisation responds to the interest of capitalist companies to expand their operations without geographical limits, while trying to evade any localised responsibility.

It is obvious that while universalisation has a clear evolutionary direction, bringing with it the possibility of sharing the historical accumulation of each culture and collaborating mutually to overcome the common challenges and also the particular challenges of each people, globalisation acts in a regressive manner, concentrating capital and power and distancing democratic decision-making capacities from the social base, already diminished by the very decomposition of formal democracy in the institution of the state.

Something similar is happening with digital technologies and the internet, framed as they are in the aforementioned processes.

If one looks at the advance of digitalisation in the light of universalisation, the usefulness of shortening time and distances in communication becomes evident, along with the possibility of accessing and sharing knowledge freely.

In the spirit of universalisation, the internet is a positive way to express oneself, to compare habits, to share experiences, to strengthen projects, to communicate utopias, to call for transformations and to perceive the world and humanity as a whole, united by a common destiny.

But if we look at these same technological wonders under the magnifying glass of universalisation, we see that we are facing a moment of reconversion of the capitalist system, immersed in a crossroads due to the monstrous speculative derivation of its surpluses, and the reduction for capital of spaces with desirable profit margins in productive activities of the real economy for its desire for unlimited and hasty profit.

The globalised digital economy constitutes an escape hatch, together with the promoted “green revolution”, from a system of exclusionary and unjust accumulation that tends, by its very essence, to the concentration of wealth, to social segmentation and, contrary to what it claims, to the depredation of the common home, privatising welfare and socialising only hardship.

No wonder then that the World Economic Forum itself, a conclave of the world’s powerful and insensitive, has fervently embraced both the digital cause and the green transformation discourse. For Naomi Klein, “The Great Reset” – a programme presented at Davos 2020 by Klaus Schwab, head of the WEF and also a board member of the elite Bilderberg club and Prince Charles, a conspicuous member of British royalty – is a place to tout for-profit technological solutions to complex social problems; to listen to the heads of transnational oil giants opine on the urgent need to address climate change; to listen to politicians say the things they say during crises: That this is a tragedy but also an opportunity, that they are committed to building back better and ushering in a “fairer, greener, healthier planet”.

Not for nothing was Microsoft CEO Brad Smith among the keynote speakers on that occasion, who explicitly stated: “Data, and technology in general, are indispensable tools for solving almost every problem we face”.

It is also no coincidence that back in March 2017, the World Economic Forum (WEF) opened the first Centre for the Fourth Industrial Revolution in San Francisco, USA, in an area with a high concentration of incubators and technology companies.

There is a clear fork in the road. One path is short and fast, that of uncritical digital technologisation, which leads to greater dependence on concentrated powers and an increase in inequality and social exclusion. The other path, with a look at the common interest and social participation, is perhaps longer and slower, but leads to more autonomy, equity, inclusion and social complementarity.

Along the path pursued by concentrated capital, the internet will lose all social and human components. The longed-for universal connectivity will then be merely the exploitation by greedy corporate businessmen of the social investment in infrastructure executed by states.

In this way, digital platforms will multiply, offering precarious work. Teleworking, far from serving to reduce working hours, will increase them. The wage gap between knowledge workers and second- or third-tier jobs will widen. For women, the new digital exploitation will add to the unpaid care work and the pay gap with men.

If the internet definitively becomes the highway of transnational business, the instruments of information manipulation, surveillance and control will continue to proliferate, transforming people into objects of unlimited data extractivism.

The digital corporate advance over education and health will bring with it the ideological intervention of their contents and the invasion of the privacy of the communities involved, always for the greater glory and wealth of the shareholders of investment funds.

Along this path, inequality will increase between the global North and South, which will continue to supply the North with digital and physical commodities through extended consumption without enjoying the benefits of patent ownership and technology licensing.

Along this path, corporations will first invade and then capture every glimmer of democratic activity, becoming a kind of corporate global government, encroaching on the multilateral system of international relations and turning it into a mere screen to legitimise their interests.

The alternative path is the common appropriation of digital technology for the exclusive benefit of the human community as a whole.

For the right to the internet to constitute an effective extension of rights, as in any other field and occasion in history, the decisive participation of peoples and their organisations is essential.

In this way, an alliance can be established between the state and the organised community, a public-community alliance that displaces the nefarious “public-private partnership”, which in the neoliberal framework legitimised the intrusion of capital in regions that were previously off-limits to its business.

From this public-community alliance, universal connectivity projects of shared or autonomous management can be undertaken so that infrastructures, tools and knowledge and the necessary state investment are oriented towards the common good and the formation of active and critical users.

In this perspective, the priorities are to guarantee sovereignty and autonomy with the generation of decentralised, non-invasive, interoperable and free-choice technological alternatives; to forge cooperation networks between organisations to go from being mere receivers to generators and makers of technology policies; and to enable unrestricted and shared access to strategic knowledge between nations.

It is inescapable to place heavy taxes on large technology companies and digital platforms today and prevent their flight to tax havens to finance an Unconditional Universal Basic Income. We must also demand laws that guarantee the protection and individual or community ownership of data and regulate the actions of commercial digital platforms in the public interest.

It is essential to appropriate not only the use, but also the creation of technology and social networks that are neither tutelary nor extractivist in order to favour communication, organisation and social rapprochement.

Ultimately, scientific and technological progress is an achievement of peoples and their historical accumulation. Digital tools must be used for the full realisation of human beings. Otherwise, they are not only useless, but also harmful.

This paper was presented on 6/10/21 at the session of the Education, Academia, Science and Technology Group (GEACT), a civil society mechanism in the sustainable development agenda (Agenda 2030) and at the Forum of Latin American and Caribbean Countries on Sustainable Development (FPALCDS). Some of the contents of the conference “Utopias or Dystopias” are part of the collective diagnoses and proposals. Los Pueblos de América Latina y el Caribe ante la era digital” organised by the Internet Ciudadana space.

- Javier Tolcachier is a researcher at the World Centre for Humanist Studies and a communicator for the international news agency Pressenza.