Can we still win the race against time?

The good news is that a consensus has been reached and agreements have been made to meet every year. The big losers are the countries of the South. They bear the least responsibility for global warming, but take the heaviest blows. 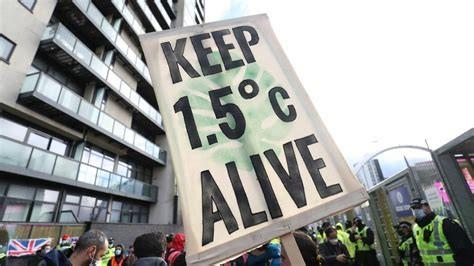 The stakes of this summit were high. The meeting can be summed up as ‘one point five to keep the planet alive’. After fourteen days of negotiations, the anger among climate activists and countries from the South is great and rightly so. What's next?

1.5°C. The final text explicitly states that the aim must be to limit the global temperature increase to 1.5°C and not to 2°C. That is a good thing, but that is only an aspiration, a target. With the current national plans of all countries combined, we are heading for a catastrophic warming of 2.4°C.

Annual revision. Until now, there was a major climate summit every five years. From now on it will be held annually. Each country will then be required to review its climate plans against the targets and, if necessary, improve them and make them more ambitious. In itself this is a good thing. However, poor countries that are far less responsible for historical emissions and have far fewer resources at their disposal will now come under just as much pressure as the rich countries.

‘Fossil fuels’. It may sound unlikely, but since the signing of the Kyoto Protocol in 1997, no summit has explicitly referred to the phase-out of fossil fuels. Now, for the first time, this summit did. There were pledges and alliances to phase out the use of fossil fuels. However, a look at the details shows that they will bring little or no change in the short term.

To avoid a climate crisis, oil and gas production should immediately and steadily decline by 3 percent per year from now on. Instead, production continues to increase year after year (it exceptionally did not in 2020, but that was the covid year).

Subsidies. It was agreed to phase out fossil fuel subsidies. Annually, the sector still receives as much as $5,900 billion in subsidies. This should not be ‘phased out’ but should be reduced immediately and dramatically. $5,900 billion is far more than what is needed to enable a rapid green energy transition.

Keeping it in the ground. For the temperature of the planet to stay below 1.5°C, according to the scientific journal Nature, 89 percent of proven coal reserves, 58 percent of oil reserves and 59 percent of gas reserves must remain underground. The lobbyists of the fossil fuel industry did everything they could to avoid being confronted with binding agreements made on this. They succeeded.

Coal. Coal is the big culprit, but many countries of the South are extremely dependent on it. India, for example, depends on coal for 70 percent of its energy, China for almost 60 percent. Under the influence of these countries, the final text was toned down: 'phase-out' of coal burning was replaced by 'phase-down'.

The director of the International Energy Agency (IEA) hopes that advanced economies take a leading role and become an example for the emerging world. If they don’t do it, they shouldn’t expect the emerging world to do it.”

Methane. More than 100 countries signed an agreement to reduce methane emissions by 30 percent between 2020 and 2030. That was the low-hanging fruit of the summit. It could reduce the global average temperature by about 0.1°C by 2050. We must remember that this is only as much as the warming we have experienced since COP21 in Paris in 2015.

Climate justice. According to the IAE, an annual investment of $4,000 billion will be needed until 2030 to achieve zero emissions. About 70 percent of that, or $2,800 billion, should go to the emerging and developing countries. This is necessary to realise the energy transition there, to compensate for the damage caused by warming, and to enable these countries to adapt to climate change.

The 100 billion dollars annual aid pledged in Copenhagen in 2009 is only a trifle of what is needed, and that meagre promise has not even once been kept. The summit went no further than a vague call ‘to mobilize climate finance from all sources to reach the level needed to achieve the goals of the Paris Agreement, including significantly increasing support for developing country Parties, beyond $100 billion per year.’ Nowhere does it specify how that funding will happen or how big it should be.

Deforestation. More than 100 world leaders have pledged to halt and reverse deforestation by 2030. The problem with this nice-sounding promise is that it is neither enforceable nor transparent, and it lacks a financing plan. Moreover, logging is allowed to continue in the meantime.

As is typical of such summits, glowing promises and polite calls are easily brushed aside. What is usually missing – and this summit is no exception – is a long-term action plan and concrete commitment from the participants. There is no enforceability at all.

The good news is that a consensus has been reached and agreements have been made to meet every year. Also good news is that China and the US, the two biggest emitters, have agreed to work closely together despite the very tense atmosphere between them. This cooperation is an important precondition for tackling important dossiers in the future.

The big winner of this summit is the fossil sector. With more than 500 lobbyists, they formed the largest delegation of this climate summit. The sector can sleep soundly: despite the great promises and alliances, this sector still holds its grip on the global economy, at least in the short term.

The big losers are the countries of the South. They bear the least responsibility for global warming, but take the heaviest blows. Nor do they have the resources to realize the necessary energy transition. Yet climate justice was one of the main demands of the vast majority of the countries and of the many climate activists.

The countries of the North are unwilling to bear the cost of their historic climate debt. This makes them primarily responsible for the ongoing climate degradation. Without a serious transfer of resources – a multiplicity of what they are now promising – we are heading for a climate disaster.

Certainly, the result could have been worse. But we cannot ignore the fact that the heads of government ultimately failed. Lia Nicholson, chief negotiator for Antigua and Barbuda and chair of the 37-member Alliance of Small Island States, said: ‘We are extremely disappointed and we will express our grievance in due course.’

‘Our fight is far from over. We must recognise that this is a fight that we cannot afford to lose,’ said Selwin Hart, UN Assistant Secretary-General for Climate Change. UN Secretary-General Guterres, for his part, reiterates his urgent appeal: ‘Our fragile planet is hanging by a thread. (…) It is time to go into emergency mode – or our chance of reaching net zero emissions will itself be zero.’

Greta Thunberg fully agrees with that urgency. Together with a number of young climate activists from around the world, she petitioned Guterres to declare a 'climate emergency'.

The real battle is not fought at such a summit, but outside of it. That battle has yet to begin. It is up to us to build a different balance of power and to force government leaders and the economic elite to take a different course. A course that does not safeguard the profits of the large capital groups, but that of the planet. A course that does not pass costs on to the common man or woman, or to the countries of the South.

We will all have to seek forms of struggle that ensure the survival of our planet and that this is achieved in a social way.