Detentions, deportations, and criminalization of migrants

It is urgent to stop criminalizing people and groups in cross-border mobility, ensure their free movement and recognize their rights, needs and motivations. 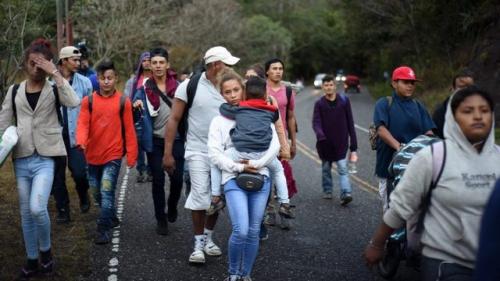 Migration control and the closure of borders to vulnerable and undocumented populations are dynamics present in different countries and areas of the world. Some of the regions where these processes occur very acutely are Europe, Central and North America, and these have been increasing for years. However, with the health emergency due to the Covid19 pandemic, and under the political use of the health argument of the undocumented foreigner as an agent of contagion (with a view to containing irregular populations), these situations only worsened, and aggressions have increased towards migrants.

This is particularly the case of migrants from the Northern Triangle of Central America (TNC) in transit through Mexico, and recently of Haitians. All of them were forced out of very hostile contexts of expulsion from their communities of origin and face the condition of being irregularized by certain countries such as the United States (US) and Mexico, whose immigration regularization procedures have been very adverse, slow, and not very efficient. In addition, these migrants suffer multiple attacks and violations of their human rights in the countries of transit and destination, by different social actors, criminal groups, and official and private institutions.

It also highlights that, on the part of the different national states and at the regional level, the processes and actions of migratory policies are increasing more and more, which not only generate dynamics of irregularization of these populations of the TNC and Haiti, but are also "illegalizing" the migrants, and reading them and presenting them as transgressors of the law (criminalizing them), just because they lack immigration documentation. These control / containment policies applied in Mexico have been and are determined by the geopolitical anti-immigration agenda of the US in recent decades, a discriminatory agenda that seeks through different means to stop these human mobilities.

Faced with these exacerbated and biased discourses (in terms of misinformation and racist prejudice), it must be reiterated that migrants are not criminals. On the contrary, they are individuals and social groups that, in very adverse socioeconomic and (in) security contexts in their countries of origin, try to improve their existence through cross-border mobility strategies. The people of the TNC live in very precarious situations related to the lack of employment, very low wages, generalized poverty and contexts of criminal, institutional and intra-family violence; in addition to the environmental impacts of phenomena such as hurricanes and tornadoes (recently the cases of Eta and Iota in 2020). For their part, Haitians in their long journeys flee from violence, racism, and the lack of decent and sufficiently paid jobs (both in Haiti and in countries where they have temporarily resided such as Brazil and Chile).

Mobility as a search strategy for a decent life: caravans

Migrants, through the "caravans" (collective mobility and with some organizational strategies), have been leaving en masse from the city of Tapachula, Chiapas, in southern Mexico. This city is overwhelmed and does not offer migrants basic living conditions, in terms of work, accommodation, health, among others. De facto, and in the context of the clear imprint of the US regional anti-immigrant strategy on the current Mexican migration policy towards irregular populations, Tapachula, and in a broader sense the southern border and Mexico, have become immobile territories, of violence, and immigration containment. This city no longer provides the jobs and essential services for migrants; it is rather an impasse and the expression of a strong precarious condition, a constant being stranded on a day-to-day basis, and without a viable future (neither in terms of employment, nor a material improvement in their life).

However, despite these very harsh conditions, migrants, in all their rights and with different actions and strategies, try to overcome adversity and seek a life with dignity and rights. It is from this situation that we must try to understand the caravans. In this sense, it is urgent to stop criminalizing people and groups in cross-border mobility, ensure their free movement and recognize their rights, needs and motivations.