On Human Rights’ Day, UK court permits extradition of Julian Assange to US

Once extradited, Assange will face a federal grand jury in the US and stand trial for 17 charges under the infamous Espionage Act and one charge of conspiring to hack into government computers. 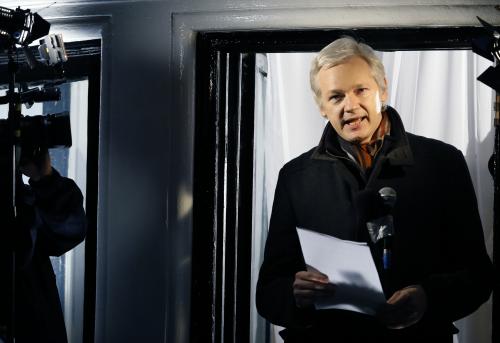 On Human Rights Day, a British court cleared the way for the extradition of WikiLeaks founder Julian Assange to the US where he will stand trial on espionage charges. On Friday, December 10, the High Court of Justice in London overturned the decision by Judge Vanessa Baraitser of Westminster Magistrate’s Court in January this year to deny the US extradition request.

The High Court’s decision was made on the appeals plea filed by prosecutors representing the US against judge Baraitser’s decision. While presenting the decision, lord justice Timothy Holroyde argued that the decision was limited to “whether the district judge was wrong to find… that it would be oppressive to extradite him,” based on Assange’s mental health situation.

In the ruling, the court argued that judge Baraitser should have notified her provisional view and given time to the US to offer assurances regarding prison conditions in the US and its incarceration arrangements for Assange.

The court also stated that it was satisfied with the US assurances that it would not be putting Assange under Special Administrative Measures (SAMs), a controversial policy of solitary confinement, or holding him in a supermax prison.

Baraitser’s January decision to deny extradition was based on concerns of Assange being put through such arrangements while in US custody. Baraitser found that it would be oppressive to extradite him due to these concerns, the medical evidence presented by Assange’s defense team that he was a suicide risk if extradition becomes imminent, and the serious mental health issues that he already suffers from.

While Assange’s defense team is expected to appeal against the high court’s decision at the UK Supreme Court, the case would be forwarded to the UK Home Secretary who had earlier sanctioned the US extradition request immediately after it was filed in 2019.

Assange is currently being held at the high security prison in Belmarsh, under judicial remand without any charge or conviction. Once extradited, Assange will face a federal grand jury in the US and stand trial for 17 charges under the infamous Espionage Act and one charge of conspiring to hack into government computers.

The high court decision was strongly criticized by rights groups, journalists and supporters of Julian Assange. “This is an utterly shameful development that has alarming implications not only for Assange’s mental health, but also for journalism and press freedom around the world,” said Rebecca Vincent, the UK bureau director of Reporters Without Borders (RSF).

In a statement, secretary general and director general of RSF Christophe Deloire said, “We condemn today’s UK High Court decision to allow the extradition of Julian Assange to the US, which will prove historic for all the wrong reasons. We fully believe that Julian Assange has been targeted for his contributions to journalism.”

“On UN Human Rights Day, a UK court throws investigative journalism into darkness and continues the torture of Assange,” said Kristinn Hrafnsson, editor-in-chief of Wikileaks. “This fight will not end here.” Stella Moris, Assange’s partner, called it a “grave miscarriage of justice” and highlighted the past actions of the US in hounding Assange.

Kevin Gosztola, who reported live from the judgement, called the decision a threat to global press freedoms. “President Biden’s administration cannot reasonably claim to support principles of democracy and human rights while at same time seeking the extradition of a publisher, Julian Assange, which is opposed by global press freedom organizations,” he said. “They are a threat through this case.”