Forty years after the heinous state-sponsored crimes were committed, Maya Achi women get their day in court. 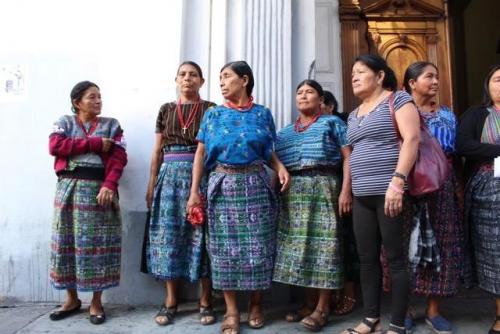 In 2019, a judge decided not to believe 36 Maya Achi women who accused six men of acts of sexual violence that took place between 1981 and 1985, the height of Guatemala’s bloody 1960-1996 internal armed conflict. The judge dismissed the charges and the men walked free.

The accused—all former members of the Civil Self-Defense Patrols (PAC), paramilitaries created by the Guatemalan army—likely did not imagine that the women survivors would successfully recuse that judge. Nor could they have known that another former PAC member, the brother of one of the six, would soon be deported to Guatemala from the United States to face his own criminal proceedings. After a series of hearings in 2021, a new judge, Miguel Ángel Gálvez, ruled that there was sufficient evidence to send that man and three of those freed in 2019 to trial. He later added a fifth man who had previously been a fugitive.

The incredible tenacity of the Maya Achi women survivors, who began seeking justice more than a decade ago, and the steadfast support of their legal representatives—Indigenous women lawyers Gloria Reyes, Lucía Xiloj, and Haydeé Valey—made it possible for their case to be heard in court today. The presiding judge is Yassmín Barrios, known internationally for her fierce independence and her role in previous high-profile cases, including the 2013 genocide trial against former dictator Efraín Ríos Montt and the 2016 Sepur Zarco trial, the first to address wartime sexual violence committed by the Guatemalan army.

Now, the Maya Achi sexual violence case is a striking reminder that while the old guard military and their oligarchic allies might be trying to block the sun with one finger—to use a well-known Latin American saying—the light still finds a way to shine through.

A long search for justice

The Rabinal Legal Clinic (ABJP) began to collect testimonies from surviving victims of army massacres in the village of Chichupac and surrounding communities in the early 2000s. Given the difficulties of pursing prosecutions in Guatemala, in 2007 ABJP lawyers filed a complaint on behalf of the victims before the Inter-American Commission on Human Rights (IACHR).

“Clear patterns began to emerge,” recalls lawyer Haydeé Valey, who has been accompanying women survivors since 2011. “The women were detained during market days, when they went to sell their surplus crops and livestock. The PACs accused them of being guerrillas. They were then detained and taken to the Rabinal military detachment, where they were interrogated about weapons, about their husbands, about guerrilla activity, and then they were gang raped.”

Sometimes women were raped in their homes amid military operations carried out by soldiers and the PACs. “They would go to the women’s homes and ask for their husbands,” says Valey. “They would rape women and girls, with no regard for their age.” The military also pursued and attempted to capture the surviving victims who fled to the mountains. “Several women were captured, raped, and then taken to the military detachment,” she says, where they were raped again and again.

The ABJP lawyers uncovered another disturbing pattern. Many families who had taken refuge in the mountains, where they endured harsh living conditions and ongoing repression, decided to avail themselves of the 1982 amnesty for “political and common crimes” decreed by military dictator Ríos Montt. However, once in government custody in the military detachment, the women were separated from their families and sexually assaulted.

As in the Sepur Zarco case, the Maya Achi women were also subjected to a system of forced labor. According to Valey, “after the massacres, when the infamous model villages were set up, the women were forced to prepare food for the PACs and the soldiers.” The Historical Clarification Commission (CEH) documented that domestic slavery was part of the counterinsurgency strategy applied by the army in conjunction with the PAC.

Along with collecting testimonies, the ABJP also provided psychosocial support for the survivors and their families, with the aim of empowering the women. Eventually, the women survivors brought a complaint to the public prosecutor's office in Rabinal. But they met resistance.

“The assistant prosecutors who received the first complaints questioned the credibility of the survivors, asking why they only dared to talk about what had happened after so much time had elapsed,” Lucía Xiloj, a Mayan K'iche' lawyer and representative of the Maya Achi women survivors, tells us. “They even told them that these cases should not be investigated.” Xiloj and her colleagues requested that the case be transferred to the Human Rights Prosecutor’s Office, which is headquartered in Guatemala City.

In 2016, the plaintiffs successfully petitioned the pretrial judge to hear the women’s testimonies and admit them into evidence. This was traumatizing for the survivors, Xiloj notes, because not all judges are trained to work with victims of these crimes. “The judges would leave the women locked in a room for two or three hours before taking their statements. They felt anxious about being in the capital city, far from their communities,” Xiloj explains. “The judges also didn't display much patience with them when they were giving their statements.”

After the arrests, the women complainants began to receive threats from relatives of the ex-paramilitaries. “The sons of the men who were arrested told me that they were going to grab me when I was walking and that they would put me in a sack and get rid of me,” said Paulina López, who, according to the public prosecutor’s accusation was raped at the age of 12 by the brothers Bernardo and Benvenuto Ruiz Aquino.

López is one of the petitioners who brought the Chichupac case to the IACHR and, eventually, the Inter-American Court of Human Rights. In a 2016 judgment, the Court found the state of Guatemala responsible for at least 183 cases of forced disappearance and at least 361 cases of forced displacement as a result of military operations carried out in conjunction with the PAC. The Court ordered Guatemala to investigate, prosecute, and punish those responsible, and to guarantee the physical integrity of the complainants, to whom it granted precautionary measures.

The case was first assigned to pretrial judge Claudette Domínguez, who presides over High Risk Court A. Human rights groups have criticized Judge Domínguez for several rulings that they claim evidence her ties to and sympathy for the military, including her 2016 decision to exclude more than 80 percent of the victims in the mass forced disappearance case known as CREOMPAZ, which has remained in legal limbo ever since.

A little over a year after the initial arrests in the Achi women’s case, Domínguez ruled on June 21, 2019 that there was insufficient evidence for a trial. She ordered the definitive dismissal of charges for three defendants and the provisional dismissal of charges for three others. Within days, all six were released. Her decision did not take into account the testimonies of the women survivors, who fully identified the accused.

The women survivors and their lawyers filed a recusal motion against Domínguez. They argued that the judge had failed to fully consider all the evidence and had demonstrated a discriminatory attitude toward the Indigenous complainants when she asked them if the Attorney General’s Office was paying them to testify. The High Risk Appellate Court found Judge Domínguez had acted with discrimination and bias and removed her from the case.

The case was transferred to High Risk Court B, led by Miguel Ángel Gálvez. This made a huge difference. “Judge Dominguez used to address us and the victims in a very rude manner,” says lawyer Lucía Xiloj. “On the other hand, Judge Gálvez is very cordial with all the parties to the proceedings.” She notes that unlike Domínguez, who rarely if ever referred to international standards, Gálvez regularly cites and applies international standards, including international humanitarian and human rights law, the jurisprudence of the Inter-American Court, and jurisprudence of other international tribunals such as those of the former Yugoslavia and Rwanda, especially regarding the evaluation of the testimonies of victims of sexual violence. This is crucial, says Xiloj; sexual violence crimes are known as “crimes of solitude,” since there are rarely other witnesses to corroborate the victims' testimonies.

A ground-breaking opportunity for gender justice

The trial began on January 5, 2022, after a brief hiccup during the first scheduled hearing on January 4, when the lawyer for three of the defendants was a no-show. Judge Barrios, who has ample experience with defense efforts to delay and obstruct human rights trials like this one, ordered the lawyer, Julio César Colindres Monterroso, to appear the next day.

Colindres appeared in court the following day. He claimed that his absence was due to health concerns and requested a one-week delay in the proceedings. Judge Barrios rejected the request, saying that she would not abide any efforts to derail these proceedings. The trial began.

Government prosecutor Paula Herrarte presented the accusation against the five defendants, each of whom declared their innocence. In subsequent hearings over the next few days, expert witnesses discussed the context in which the women survivors were systematically sexually assaulted and the lasting impacts on them, their families, and their community; the nature of racial bias and discrimination against the Indigenous population in Guatemala and how state violence was racially motivated; and the nature and purpose of the PAC and their relationship with the Guatemalan army.

During the second week of the trial, the court is expected to hear the testimonies of the Maya Achi women survivors. Meanwhile, Xiloj, Reyes, and Valey have petitioned the Criminal Chamber of the Supreme Court to nullify the ruling dismissing the charges against the other three ex-PAC members who walked free in 2019, Pedro Sánchez Cortez, Simeon Enríquez Gomez, and Felix Tum Ramírez.

In the meantime, the Maya Achi women survivors will face at least some of their perpetrators in a court of law and seek justice for the grave harm done to them. It’s a reckoning that has been 40 years coming.

- Jo-Marie Burt teaches at George Mason University and is a Senior Fellow at the Washington Office on Latin America (WOLA).

Burt and Estrada are founders and co-directors of Verdad y Justicia en Guatemala, which monitors and reports on war crimes prosecutions in Guatemala. They are on Twitter @VerdadJusticiaG.