Ukraine and the global economic war: is this barbarism or civilization?

The West’s actions against Russia since the war in Ukraine could signal an emerging new order that shuns the U.S. for weaponizing the dollar and Western control over the global financial system. 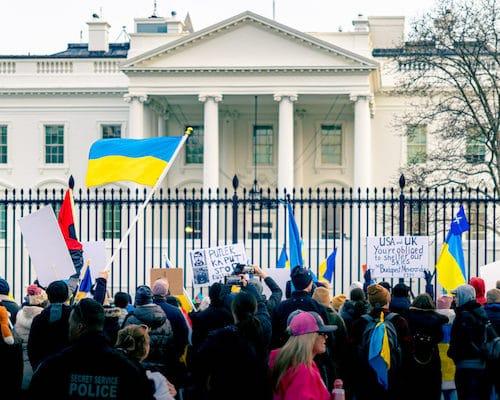 Do the Ukraine war and the action of the United States, the EU and the UK spell the end of the dollar as the world’s reserve currency? Even with the peace talks recently held in Turkey or the proposed 15-point peace plan, as the Financial Times had reported earlier, the fallout for the dollar still remains. For the first time, Russia, a major nuclear power and economy, was treated as a vassal state, with the United States, the EU and the UK seizing its $300 billion foreign exchange reserves. Where does this leave other countries, who also hold their foreign exchange reserves largely in dollars or euros?

The threat to the dollar hegemony is only one part of the fallout. The complex supply chains, built on the premise of a stable trading regime of the World Trade Organization principles, are also threatening to unravel. The United States is discovering that Russia is not simply a petrostate as they thought but that it also supplies many of the critical materials that the U.S. needs for several industries as well as its military. This is apart from the fact that Russia is also a major supplier of wheat and fertilizers.

Seizing Russia’s funds means that the faith in the United States as the world’s banker and in the dollar as the global reserve currency is in question. Why should countries maintain any trade surplus and bank it abroad if that surplus can be seized at will through sanctions imposed by the West? The promise of a dollar as the world’s reserve currency was that all surpluses in dollars were safe. With the seizure of the Afghan central bank’s $9.5 billion, and allocating $7 billion out of it, the United States has shown that it considers the dollar reserves of another country, held by the United States’ central bank, as its money. It may be an economic asset in the books for a country to maintain its currency reserves with the U.S. central bank. But it is effectively a political liability, as the U.S. government can seize this asset at will. The United States has earlier shown its capability of imposing sanctions against countries such as Iraq, Libya and Venezuela and seizing their assets that resulted in far-reaching negative impacts for these countries. The seizure of Russia’s foreign exchange reserves by a handful of Western countries—ex-colonial and settler-colonial states—shows that the so-called rules-based order is now based on weaponizing the dollar and the West’s control over the global financial system.

Economists—Prabhat Patnaik and Michael Hudson—and financial experts such as Zoltan Pozsar of Credit Suisse are now predicting a new regime in which another currency or some other variant system will emerge as the world’s new reserve currency. According to Pozsar, “When this crisis (and war) is over, the U.S. dollar should be much weaker and, on the flipside, the renminbi much stronger, backed by a basket of commodities.”

What has led to these predictions? After World War II, the Bretton Woods agreement led to the dollar becoming the world’s reserve currency. It replaced the British pound and was pegged to gold at a conversion value of $35 to an ounce of gold. In 1971, then-President Richard Nixon ended the Bretton Woods system and removed the “convertibility of U.S. dollars to gold,” which meant that the dollar was now backed only by the U.S. government (or U.S. Treasury) guarantees. The dollar as reserve currency had three things going for it in the postwar years: It was backed by the United States, which was the world’s largest industrial producer; the United States was the preeminent military power even if challenged by the Soviet Union; and it was backed by West Asian oil, the largest traded commodity, being priced in dollars.

The denomination of West Asian oil, particularly of Saudi Arabia, was critical to the United States and was determined by its military power. The coup in Iran against then-Prime Minister Mohammad Mosaddegh in 1953, the 1958 coup in Iraq, and many other political events in West Asia can be understood more easily if the world understands the importance of oil for the United States. This was the basis of the Carter Doctrine, extending the Monroe Doctrine equivalent to the Persian Gulf region—and reflected the United States’ interest in the region and its lack of tolerance for interference by any outside power there. U.S. foreign policy in West Asia has been captured on bumper stickers and antiwar protest signs for decades with variations on the phrase, “Our oil is under their sand.” The United States’ control over West Asian oil combined with its industrial and military power ensured that the dollar remained as the world’s reserve currency.

Two recent events are important in this context. China and the Eurasian Economic Union consisting of Russia, Kazakhstan, Kyrgyzstan, Belarus and Armenia seem to be moving toward a new international and monetary system. India and Russia also seem to be working out a rupee-ruble exchange based on India’s need to import Russian arms, fertilizer and oil. India had already created a similar system earlier for buying Iranian oil in rupees. This might also give a fillip to increasing India’s exports to Russia. Saudi Arabia has recently indicated that it might also designate its oil sales to China in yuan and not dollars. If this happens, this would be the first time since 1974 that Saudi Arabia would sell any oil in a currency other than the dollar. This would give an immediate fillip to the yuan, as more than 25 percent of all of Saudi Arabia’s oil is sold to China.

The United States dominates the services, intellectual property (IP) and information technology (IT) markets. But the markets for physical goods, unlike for services such as IP and IT, are based on a complex model of supplies and, therefore, have complex global supply chains. If the Western economic war means taking out Russia’s supplies from the global market, many supply chains are in danger of unraveling. I have already written about the energy war and how the European Union depends on gas piped from Russia to Europe. But many other commodities are critical for those sanctioning Russia and those who may now find it difficult to trade with Russia due to the West’s sanctions.

Strangely enough, one of the key elements in the supply chain for manufacturing chips depends on Russia. Russia is a major supplier of sapphire substrates (using artificial sapphires) that go into the manufacturing of semiconductor chips. The other critical item for chip makers is neon, of which the two major suppliers are located in the southern Ukraine cities of Mariupol and Odessa. They together produce “between 45 percent and 54 percent” of the global neon supply.

I have already highlighted earlier the danger posed to the EU’s climate change plans as a result of the Ukraine-Russia conflict, which could also jeopardize its plan to shift to gas as a bridge fuel. Using batteries as the key storage element in the renewable energy route also has a substantial Russian weakness. Nickel is critical for electric batteries, and Russia is the third-largest supplier of nickel in the world. With the United States and the EU imposing sanctions on Russia, this may lead to China, already emerging as the world’s largest battery supplier, rising to an even more dominant position in the world battery market.

The other supply chain issues that could come up as a result of the Russia-Ukraine war involve palladium, platinum, titanium and rare earth elements. All of these minerals are required by advanced industries and are likely to be caught up in supply chain bottlenecks worldwide. They are also on the list of 50 strategic minerals that the United States needs since they are critical to its security. A look back at how the global supply chains seized up during COVID-19 should provide the world with a sense of what the coming crisis could look like and why it could be a lot worse than what was witnessed during the pandemic. Sanctions are easy to impose, much harder to lift. And even after the lifting of sanctions, the supply chain will not come together seamlessly as it did before. Remember, these global supply chains have been incrementally configured over decades. Undoing them using the wrecking ball of sanctions is easy; redoing them is a lot harder.

The food supplies to the world will be hit even harder. Russia, Ukraine and Belarus produce a significant amount of fertilizers needed by farmers everywhere. Russia and Ukraine are among the biggest exporters of wheat. If Russian wheat is sanctioned and Ukraine’s harvest is hit due to war, the world will not find it easy to thwart a severe food shortage.

There is no question that the world is on the cusp of a major economic change. This turning point will either lead to the complete destruction of the Russian economy, even if Russia achieves a quick peace with Ukraine and there is no NATO-Russia war. Or it will reconfigure a new economic order that has been in the offing: a world order with cooperative solutions instead of military and economic wars for resolution.

- Prabir Purkayastha is the founding editor of Newsclick.in, a digital media platform. He is an activist for science and the free software movement.

This article was produced in partnership by Newsclick and Globetrotter.