Covid-19, its impact on women's lives

In Latin America, official UN data show that more than half of women work in the sectors most affected by the economic downturn. These include domestic work, tourism, manufacturing, administrative services and the health sector. 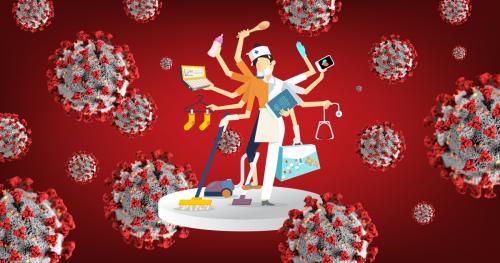 The pandemic affects public health and the social, political, and economic life of society, deepening existing inequalities. The effects of the COVID-19 crisis are felt mainly by vulnerable groups, especially women, who are more affected by poverty, unemployment, and unpaid care work. This paper will discuss how the pandemic affects women's working environments and personal lives.

According to Deloitte Global, the pandemic has affected approximately 80% of professional women, impacting their professional lives and their family and personal spheres. They have to take on an increased workload in their homes. In addition, almost 60% of women with children reported having increased responsibilities by also being in charge of their children's distance learning.

These effects have reached all corners of the world. For example, according to data from the Statisches Bundesamt - Germany's official source of statistics - since the pandemic, women in Germany have held most of the jobs designated as essential (in the health and cleaning sectors), and these are the lowest-paid jobs. At the same time, women reported spending 9.6 hours on childcare during a working day instead of 5.3 hours for men, so women are expected to work gruelling hours and take care of children for almost twice as many hours as possible as their male counterparts.

In China, according to Deloitte Global, it is estimated that because of COVID-19, 56% of women will quit their jobs in the next two years, while 16% plan to give up looking for work altogether, as they have no support or flexibility in their workplaces. Chinese women have experienced a decline in inclusion in their jobs. Since early in the pandemic, they are excluded from essential boards, belittled by their male colleagues, or treated with little respect.

In Latin America, official UN data show that more than half of women work in the sectors most affected by the economic downturn. These include domestic work, tourism, manufacturing, administrative services and the health sector. About 12% of Latin American women work as domestic workers, and 77% do not have social security because they work informally. In addition, 74% of women domestic workers have been affected by unemployment or lost hours and wages. It is due to the precariousness of the sector given low wages and lack of legal benefits.

Another effect of this is the increase in gender-based violence. Since the confinement in Mexico phone calls to emergency numbers for domestic violence increased by 20% in 2020 compared to 2019. Nationally, family violence was the reason for the most 911 contacts in 2020, with just over half a million records, followed by violence against women with 260,000 and intimate partner violence with 236,000. In Mexico City, the Attorney General's Office reported just over 27,000 investigation files for domestic violence in 2020, equivalent to 76 complaints per day.

In Argentina, daily rings to the helpline for victims of domestic violence ranged between 266 and 287 before the pandemic. After the confinement began, these rose to an average of 340 per day. As for femicides, the number of women murdered dropped during the pandemic. It went from 344 murders from March 2018 to March 2019 to 288 from March 2019 to March 2020. However, the percentage of femicides in the victim's home rose by 4.9%.

The number of femicides in Peru dropped during the pandemic. Between January and August 2020, the number of murdered women fell by 25% compared to the same period a year earlier. However, cases of domestic violence increased. Línea 100 is a Peruvian hotline dedicated to assisting people affected by domestic or sexual violence. During March 2020, the line registered just over 10,000 contacts. By the following month, with confinement decreed, the number had risen to almost 19,000, with psychological violence as the main reason for seeking support.

The pandemic has undoubtedly affected everyone, but it has done so in different ways. The highest number of cases and deaths are indeed among men, so they are the ones most affected by the virus. On the other hand, women tend to be the most affected by political, social, and economic decisions regarding the management of the crisis.  COVID-19 strongly influences the work and personal development of women in the world and makes the inequalities experienced by women even more evident.