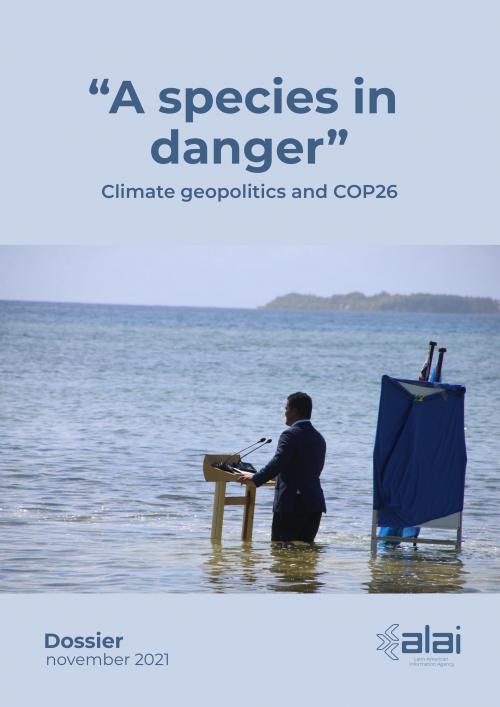 “An important biological species is at risk of disappearing due to the rapid and progressive liquidation of their natural conditions of life: mankind.” This is how Fidel Castro Ruz began his historic speech at the so-called "Earth Summit", held in the city of Rio de Janeiro in June 1992. Words wise for their accuracy and even wiser for their age: they were spoken almost exactly two decades ago in front of the representatives of the United Nations. Despite the fact that the radical scenario described by the Cuban leader has continued to be verified by actual facts over and over again, nothing seems to affect the self-interested lethargy of the global political and economic elites.

The staging of the Ministry of Foreign Affairs of Tuvalu —see the photograph that illustrates this material— would be laughable if it weren't tragic. A small archipelago in Polynesia expresses its despair over the global rise in water levels, which literally threatens to bury its country in the depths of the Pacific Ocean, a reality that could seem extreme and distant if it weren’t for the fact that various Latin American coastal cities, as well as Caribbean Islands, will suffer the same dilemma as the Tuvaluans in the years to come.

Meanwhile, the unsolvable contradictions of the prevailing system are updated against the backdrop of the climate emergency. To the theses that emphasize the “democratic character” of climate and its impact, capital responds with the stratification of nations and people: not only the contribution to greenhouse gas emissions is unequal, but so are the risks and costs faced by the dominant and dominated classes, by the central powers and the peripheral countries. While, on the one hand, some of the largest capitalists dream of colonizing other planets and abandoning a land which for them is disposable, the current number of climate refugees is skyrocketing.

But the debates and mobilizations generated around COP26 bring another issue to the fore: the inevitable influence of geopolitics in an increasingly disputed world, also in an ecological dimension. The race for global hegemony, or at least for the construction of a multipolar scenario, considers as of now climate as one more variable and instrumentalizes the discourses and practices around ecology and climate change. Behind the appeal of ‘humanity’ in the abstract, specific interests and power relations appear.

While the locomotive of history swiftly skips the stations that precipitate it into ecological dystopia, mankind —to paraphrase Walter Benjamin— gropes for the handbrake. Fortunately, from the ancient resistance of indigenous and peasant peoples to the most recent mobilizations of young people, from social movements to critical intellectuals, old and new ecological sensibilities are brought into play, demonstrating the inalienable desire of different generations to leave the same common house, the same inherited garden, to those to come. In the words of Fidel Castro: it is almost too late, but not quite yet.

After the United Nations Conference on Climate Change held in Glasgow, ALAI presents its Dossier "An Endangered Species: the Geopolitics of Climate and COP26", corresponding to the month of November 2021. With the aim of making a first assessment of the main conclave on climate matters, to share the enormous wealth and diversity of alternatives and solutions, and to bring into the fore the ecological and climate agenda of people’s organizations, we offer a series of articles, analysis and opinion pieces published in Spanish, English and Portuguese, and produced from latitudes as diverse as those of Argentina, Brazil, Mexico, the United States, India, Bangladesh, Malaysia, the Netherlands and Belgium.

Earth and nature constitute the Great Player. On their preservation depend all the other projects of the players and the future of our civilization.

The question is: Can we prevent climate catastrophe within the framework of less savage state capitalist institutions? I think there’s a reason to believe that we can.

An outgrowth of the fossil fuel industry, the transnational food system is one of the primary culprits of the climate crisis, contributing some 44 – 57 percent of global GHG emissions.

This draft deal is not a plan to solve the climate crisis, it's an agreement that we’ll all cross our fingers and hope for the best.

Apart from human misery, the cost of doing nothing is staggering: an estimated $600 trillion by the end of the century. In other words, the losses due to climate degradation far exceed the investments necessary to prevent it.

Powerful fossil-fuel corporate interests have made sure that carbon prices are not high enough to force users to switch energy sources.

The parallel COP26 in the street is telling the truth that the governments do not want to hear: we have little time, we have to change course if we want to save life and our civilization.